Harry Glück is the grand old man of the Austrian social housing architecture. He proceeds from the tradition of the socially engaged housing production of Vienna which started after the First World War with the so called ‚Wiener Höfe“. The most famous of them is the ‚Karl Marx Hof‘, (1927-1930) a real palace of housing for the working class.

Harry Glück built about 16.000 flats during the seventies, eighties and nineties. His philosophy was – and still is – building for the lower classes with the quality the rich people are fond of: close to nature and water. So nearly all his apartments have broad balconies with troughs for gardening and a swimming pool on the roof. Prime examples of his architecture are the condominium Inzersdorfer street with its lush terraces, the terrace house in the Arndtstrasse, the residential park Wilhelmsdorf with its beautiful birch grove in the interior yard as well as the wide green Heinz Nittel-yard – and of course Alt Erlaa where the stacked terraced gardens climb up to the 13th floor in altitude. The buildings are popular, the swimming pools are intensively visited, the plant troughs are literally everywhere properly maintained, and indeed, it is holiday on the balcony. Last but not least, these buildings are also appreciated by the developers, due to the low turnover of tenants and the low maintenance costs.

With his dwelling park Alterlaa he became internationally famous. 3.200 apartments in three skyscrapers with all the infrastructure necessary for a neighborhood  of this size. This is perhaps  in the whole world the unique vast housing project of this size with great appreciation of the residents. There are no social problems at all,  even nowadays 30 years later. 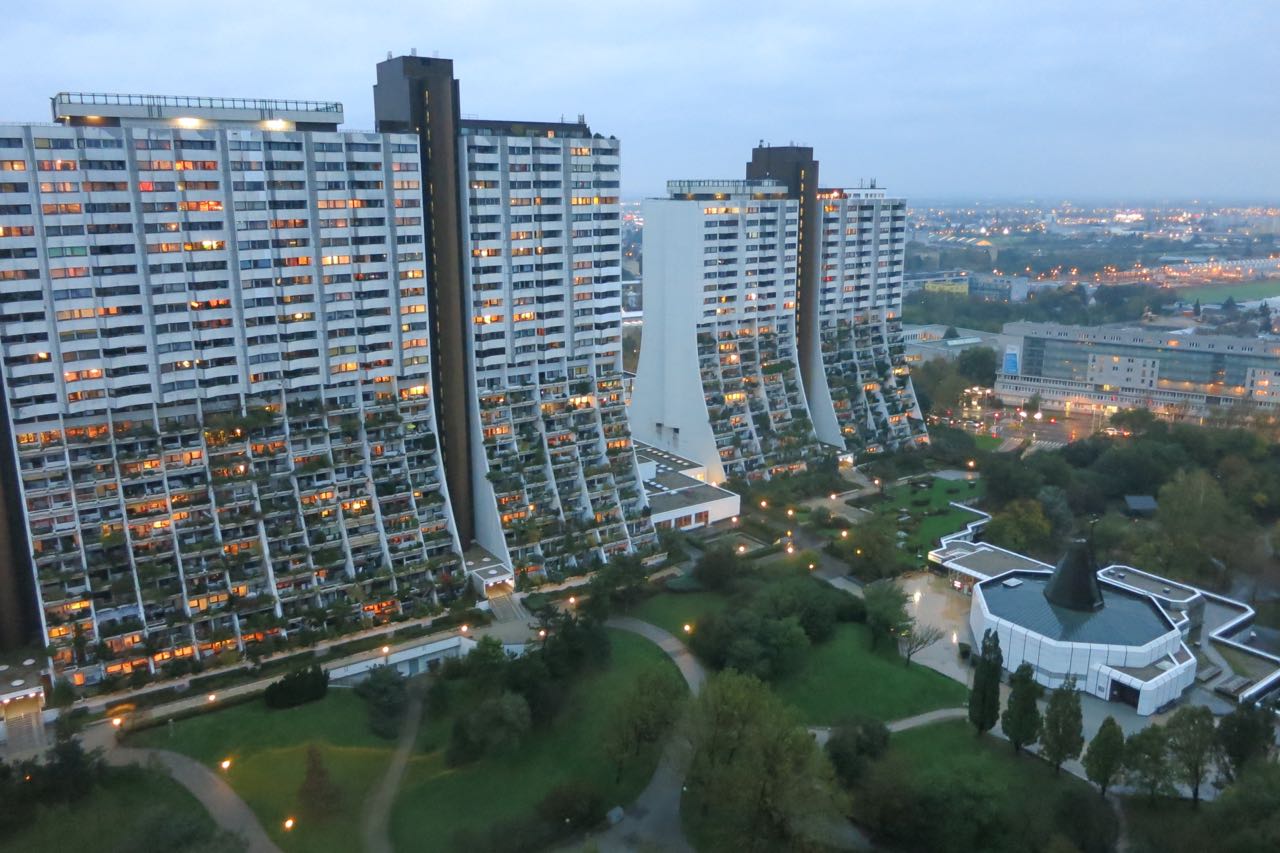 Meanwhile being nearly 90 years old he still is engaged in social housing nevertheless. He regards the concept of ‚Biotope City – the city as nature‘ as a continuation of his  conception under the changing environmental conditions in the cities. Meanwhile, however, Harry Glück moves with his central concerns in an even broader, more existential context. If 40 years ago the question was: „What does a person need to live well in the urban world?“, today under changed environmental conditions answers must be found globally and on a mass level.

Already for this century, even the most cautious forecasts give a global population growth of at least 50%; in a few decades the people will live almost exclusively in cities, too. What does that mean? What action should the human race take to secure the conditions for its survival? Climate change, s extinction of pecies, scarcity of resources – these are the issues that concern us today. The rapidly growing population of the globe with the highly successful species homo sapiens intensifies environmental problems constantly. The contribution made by the cities to this escalation is enormous. The primary question on the agenda of every politician, utownplanner, architect, citizen should therefore primarily be: „What can we do in our respective fields, how can wee contribute with our daily activities to mitigate the threat of developments and how can we prevent disasters as much as possible ?“. The claim of sustainability, however, is often made rather in general or, on the other side,  made quite in detail, most of the answers are concerned only with clearly defined aspects. Comprehensive perspectives for urban life adapting the new conditions are rare.

The buildings of Harry Glück with their green vegetation refer to an important up to date strategy in several ways: plants provide an efficient – and economical – mitigation of problems that our cities, these urban deserts,  have to fight now. Green leafs on roofs and walls of buildings can reduce the enormous temperatures in summer heat waves, differences of 3-13 degrees have been measured. Various research institutions have submitted their findings to it. Have a look at the article by Bernhard Scharf and Ulrike Pitha ‚The resilience of Cityscapes‘  on this site.

However, the leaf green can do more: it binds, through the ‚breathing‘ of the leaves, fine particulate matter, which then by the next rain drains will be washed. The green vegetation cleans the air – and thus saves lives: the high number of death toll from particulate matter pollution has just been recently again revised upwards. But more: the water overload by the torrential rains now so frequent, leading to flooding due to the fact that the sewerage systems are not calculated for this, is degreased and partly absorbed by the leaves of plants. And last but not least green is good for body and soul: ill persons recover faster when they can look at green, depressions are alleviated, people become calmer and more balanced.

To bring nature into the city, to cover building with greenery is a simple measure – would be a simple measure, it must be said, if not a modernist architecture would still be dominant in the minds of most of the architects: an architecture which shows a sharp separation between green and building. The important contribution urban greenery can play for our future is largely negated. As before, architects put bare buildings in a petrified urban area, which turns into „urban heat islands“ in the warm periods of the year. „Vegetated facades impede the view of the architecture,“ is an often heard throw-in from this side.

In opposition to this Harry Glück always puts the welfare of the residents ahead, not the architectural form as an absolute factor. The architecture integration of green vegetation in his buildings are one of the elements of this. His interest in the concept Biotope City, the idea of the dense city as a form of nature, is showing his alertness and openness for the new global challenges to structure and form, which our cities are facing today. ‚Biotope City – the city as nature‘ is seen as the logical continuation of what runs like a red thread through his work over the last four decades. It was his initiative to get in contact with the Foundation Biotope City.

The first product of our collective thinking, a dense residential building, nearly a housing castle, on all sides totally covered by green, died an ignominious death by restrictions of the local administration : the vertical greenery fell victim to the fire regulations. But Harry Glück, clever and persistent as always, did not get discouraged, and the second project now is waiting in the wings: a whole BIOTOP CITY, a district of about 1,300 apartments, a school, kindergartens, a few shops, and of course the obligatory swimming pools on the roofs – located at the Wienerberg, a contrast to the terribly bare towers of the Wienerberg City. The stage is set for a new urban development and a new architecture that accepts the environmental challenges of future.