THE NEW PLANNING REALITY: THE DENSE CITY AS NATURE

If you happen to be a pigeon or a sparrow hawk or a seed you probably see the city in a much different light then humans do. For birds, animals, plants the dense city is a form of nature too, such as those we humans regard as forms of nature – i.e. desert, dune, forest, grassland etc. Why do we not regard the dense city in this manner? In view of the ndings that cities rank high on biodiversity this no longer makes sense. A very recently published extensive international study concludes that the value of urban biodiversity in cities is a given (1). A few years ago this realization led to the creation of the BIOTOPE CITY Foundation. The foundation publishes the online journal BIOTOPE CITY subtitled “ THE CITY AS NATURE, previously issued by the University of Technology Eindhoven (TUE). However, the de nition THE CITY AS NATURE was not meant to be a garden city but the dense city as nature. It is aimed at architects, urban planners, policy makers, and even more: to all people who are professionally engaged with cities or those living in cities. The contributors of articles to BIOTOPE CITY JOURNAL write mainly in English, German, Dutch and French – the site is visited by web surfers around the world.

Meanwhile the journal is not only limited to digital words and images. It has also found its‘ expression in projects bringing this vision into practice: In Vienna, planning has begun for a ‘Biotope City Neighborhood Project,‘ a very dense neighborhood covered on all sides (vertically and horizontally) with greening. Approximately 4000 people will be living there with all the necessary amenities, including a school, kindergartens, shops, gardens, playgrounds and sports elds, etc., as well as public pools on some of the roofs; most of it is social housing. This project should serve as a model for the dense city as nature. A fascinating plan! But also extremely dif cult to realize: It not only requires a lot of thinking, it is also in stride with many existing laws, rules and practices.

The vast majority of urban planners and architects working now were and continue to be trained with the basic principle of „separation of city and land.“ This age old idea is entrenched in everything that makes a city a city and has determined and structured the established knowledge. In scrutinizing the design of cities and buildings, we can observe the existence of a separation of humans from what we call „nature” everywhere. Trees, parks and gardens are inserted as special elements for recreation for the human species, the homo sapiens sapiens. The fact that this also happens to provide a habitat for insects, birds and small mammals is considered problematic, annoying and to be combatted.

As for myself I too was educated in this way as an architect and urban planner. It was only after a traf c accident that forced me to stay at home to recuperate that I discovered this as a misconception. All I could do was to look out my window where I saw a rich insect and bird life in our small courtyard in the center of Amsterdam. It dawned on my that the separation of city and nature was wrong! Later on I checked this out and indeed, in reality, this was not the case. Biodiversity in cities is higher than in the countryside. Urban ecologists have known this for quite a long time but this is still fairly new for the rest of the world. This is especially true for the professional world, and even more so for those who strictly adhere to the planning, building and administration of cities. It is even a rather strange and unwelcome fact for them. Nature is chaotic; it is constantly changing and making a mess. Trees dropping leaves, which then must be tidied up and trees may even fall during heavy storms. Plants can damage buildings and require additional maintenance, they are constantly changing as well, they are never nished, they grow. Bird droppings, spiders penetrating the windows inside, mosquito bites, and we haven’t even mentioned mice and rats. No, do not mix nature with stone, steel and glass! Isolate them and preferably behind bars! The entire list of rules and regulations as well as all the expert opinions and views are based on this separation.

However at this juncture we have environmental problems that must be dealt with and solved. If we do not include the potential of nature this struggle will cost much more and in the most cases the solution will even produces more environmental problems. The implementation of air conditioners during a heat wave uses an inordinate amount of energy. The diameter of the pipes of the present sewer system is not enough to drain off torrential rains – but to replace them with larger pipes would take about a century to achieve. No affordable and acceptable solution has been found yet for the enormous urban CO2 emissions, not to mention the ne particulate matter issue that is shortening lifespans in cities… In contrast the inclusion of ‚ nature‘ could mitigate these problems: Green roofs and leafs retain rainwater, chlorophyll transforms CO2 and lters out particulates, evaporation from open water chlorophyll provides summer cooling, and during the winter months lea ess shrubs, trees and vegetation on facades cause a reduction in wind speed and slows further cooling. We haven’t even spoken yet about the impact on biodiversity.

This requires a very different vision of the city, beginning with a switch in our thinking about how things are supposed to be, up to and including our sense of what is beautiful and what is junk and chaos. All of the functional and physical dimensions of the city must be reconsidered as well. And that’s quite a lot! That which we have around us in our cities did not simply occur by using a magic wand. It is the result of, after all, the many considerations and inventions of many generations. The “Arsenal” in Paris once had an exhibition with the theme: ‚ Inventions that make a city.“ It was an eye opener! All the things that are so obvious to us such as the shape and the covering of roofs, sewers, sidewalks, street lighting, parks, street trees, etc. etc. were all thought out through the centuries, matured and then steeped in regulations and established to prevent errors due to lack of knowledge and to prevent erroneous frugality.

There is much to be overhauled if we are to remove the dividing lines between the city and nature. That which is possible, functional and does not endanger the various users of the city, people, plants and animals, the whole thing needs to be re- considered and newly recorded. Besides that there is such a thing as „culture.“ An example: In some countries such as the Netherlands, it is easy to have canals throughout the city; in other countries one sees children drown in them, a fence is needed– in Vienna for instance a fence has to be built around open water deeper than 3.5 cm, otherwise babies crawling in would drown. One can imagine, what a monumental task this re-thinking of regulations is and how much dedication, courage, risk assessment and commitment is needed to turn the construction of the city around and make this new vision a reality.
The pioneers are struggling. For example: Three years ago a dedicated Viennese building society began the rst project following the ideas of BIOTOPE CITY. A dense complex of about 250 social housing units should be completely covered in greenery. We published the enthousiast article by Gertrude Prudeller on it. 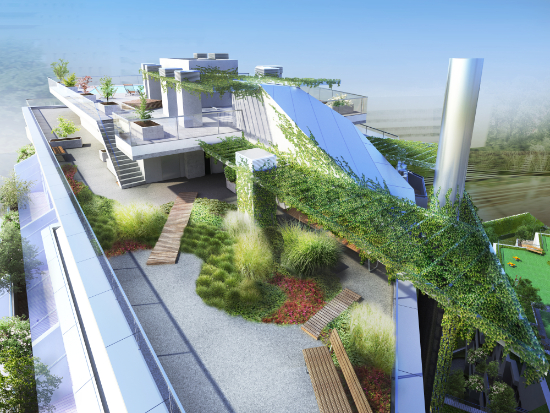 At this time, after two years of negotiations, the project will be going forward but without any vertical greening. This is due to the fact that the re protection city of cial refuses the building permit because of the risk of autoextended res (structure re that has gone out a window – or other opening on one oor – and ignited materials above, on another oor or other space) due to greenery from one window to the next.

Trial and error is the fate of pioneers! However I’m convinced that it’s only a matter of time before we consciously envision our cities as a form of nature and before they will, indeed, be planned as such. All the various disciplines will have to work together: architects, urban planners, builders, biologists, ecologists, sociologists, political

scientists, health care experts, teachers and more. The entire train of thought needs to be overturned! Yes, it will take some time just as modernism took time before it was imprinted upon the the cities by its vision of light, air and sun. The new approach of the city as nature will perhaps not be more rapid despite its‘ being immensely desirable and necessary. However, there is, in any event, no other way. We must relearn to embed ourselves into the cycle of nature as empathic partners to make use of natures powers. NB: This requires a cultural turn-around that actually goes beyond the formation of a city. 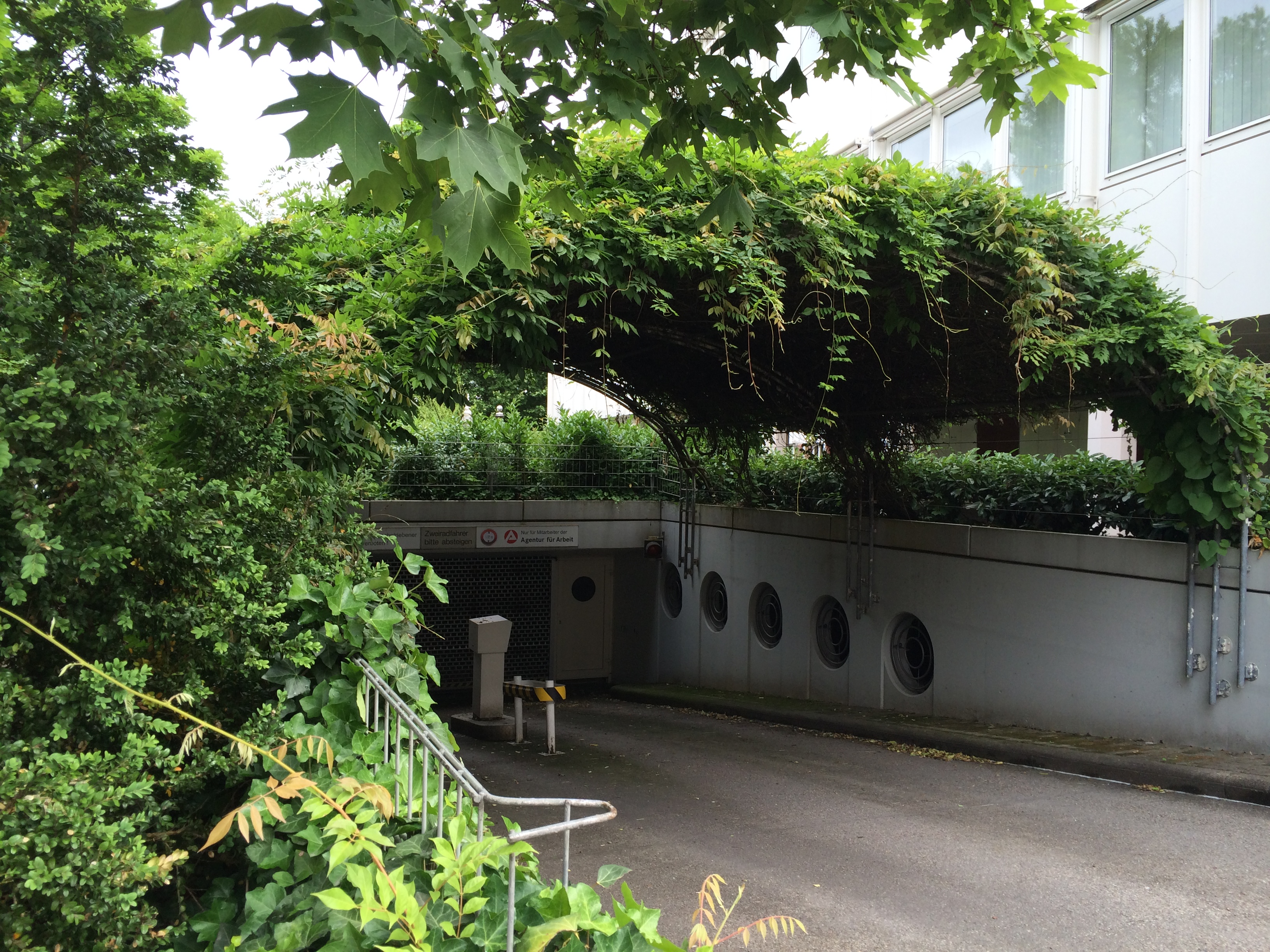 This turn-around has already begun and the momentum has grown enormously in the last few years. It was 12 years ago that I organized an international conference on the theme BIOTOPE CITY – THE CITY AS NATURE. The whole idea was so new and strange that one could hardly nd any speakers. Now there is a bursting at the seams enthusiasm for urban greening. In almost every political party program one can nd ‚Green‘. Enlightened mayors are embracing the idea of greening their cities and acquire political gain because of it, as has happened in Paris, France. In the Netherlands in virtually every municipality groups of citizens have organized themselves to protect trees, plants and birds. Urban farming has become a popular item. Playful green urban guerillas are active in Vienna, Berlin, Amsterdam and other cities. Residents are storming their city governments demanding an increase of green in urban areas. New positions in the business sectors have gained entry with a focus on roof gardens, vertical green and all that greening entails.

Besides enthusiasm there is also a need for research of what is possible, what the effects are and the costs and how new rules need to be set out. This also demands the removal of barriers between disciplines: Specialists in planning and construction need to be work together on equal footing with specialists in ’nature‘ and greening. In

planning the Vienna ‚Biotope City Neighborhood‘ project this “crossover” has already begun because of problems with summer heat, the need for energy-ef cient construction and an increased sewage tax: The ecologists in the team are being eagerly consulted by the housing associations, with avid interest in what the bene ts of greening will be and how it should be used. A study by the University of Natural Resources and Life Sciences Vienna (BOKU Wien) provides evidence for the cooling effects of chlorophyll in urban heat waves (2). A recent comprehensive study of the German Ministry for Building and Regional Planning provides an overview of methods and costs of vertical green (3) – and there are more studies, step by step elaborating profound knowledge and elements of know-how for a new system of regulations that will realize the vision of the city as nature. This will make it possible for investors and policymakers to decide for investment in greening as an advantage. It will certainly take time before nature visibly makes its mark in the city. If the new ‚Biotope City Neighborhood‘ project in Vienna proceeds swiftly it will be inhabited no earlier than, approximately, in 6-7 years from now. Let us hope that the Vienna regulations system will keep the tempo up so that the result of the project ultimately will really have something to do with the goals set at the beginning of the planning process.