THE NATURE OF GREEN

Use of the term “green” could be a good thing—if it was clear that “being green” meant applying ecological knowledge.

I was looking at an infographic on Twitter recently. It was in the form of a wheel of words, listing dozens of objectives and issues relating to urban design. Hoping that soil, water, vegetation, habitat, or biodiversity would be featured, I looked for some mention of these terms. I did not find soil, water, vegetation, habitat, or biodiversity, but I did find the word “green”. What I found to be strange about that is that “green” was the only word in the graphic to be presented in inverted commas. Perhaps the writer wanted to acknowledge that there is uncertainty about what is meant by the term. If so, it would be helpful to choose something more precise. Did the writer mean vegetation or environmentally sound processes? I don’t know. However this episode inspired me to write this article on the various meanings and misunderstandings associated with the word.

Part of the background with the term “green” is its political dimension. The German Green Party was founded in 1980, after green candidates began to stand for election in Belgium and Germany in the 1970s. The British equivalent, founded as the PEOPLE Party in 1972, became the Ecology Party in 1973 and, following the European example, the Green Party in 1985. A green party was established in the United States in 1984. There are now Green parties in over 90 countries. One of the key values of the Greens is “ecological wisdom”. Civilization and cities will need to apply ecological wisdom to survive, so conveying that message through the use of the term green could be a good thing, if it was clear that “being green” meant applying ecological knowledge. 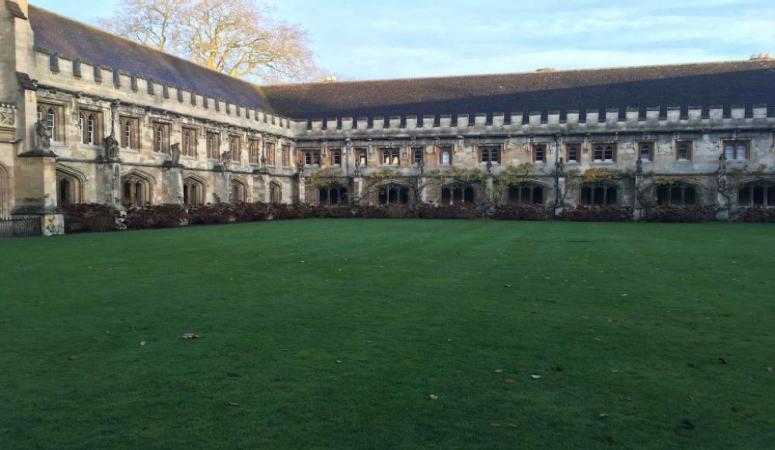 Oxford colleges were some the first customers for the lawnmower, which was invented in 1830. Photo: Gary Grant

We frequently read about the need for green infrastructure and the need to green cities, neighborhoods, streets, and buildings. Various definitions of green infrastructure list every conceivable kind of green space and water body (with watercourses and water bodies sometimes referred to as blue infrastructure). A limitation of these catch-all definitions is that the wide spectrum of quality of green spaces may not be evident. Not every category of green infrastructure is of equal value. Although it is nearly always preferable to replace sealed surfaces with soil and unvegetated surfaces with vegetation, some types of green infrastructure lack habitat and species diversity, or may require heavy inputs of energy, irrigation, and pesticides. A notable example of such resource intensive green spaces are lawns, which probably originated as short grasslands maintained by grazing animals in Europe, but which are now found across the globe, even in deserts and jungles, where the climate is unsuitable for lawns and the indigenous vegetation would be unlikely to create this effect. The modern lawn became possible with the invention of the lawnmower in 1830. An area of unproductive land with no purpose other than ornamentation is a display of wealth and control. Lawns have long been considered a sign of “civilization” and have spread in concert with modern city-civilization. “Lawns” must be kept short and must remain green for people to accord them the name. They are maintained by many cuts by gasoline-powered machines through the growing season and, in most climates, also need to be irrigated through the dry season in order to stay green. Apart from a few exceptions, these are simplified ecosystems with a lack of biodiversity and low ecological value. They do not provide the full range and intensity of ecosystem services provided by the more natural habitats that would replace them if they were neglected or abandoned. Lawns are ubiquitous in most all cities and, like many other ornamental landscapes, are green in color. This means that there is an expectation on the part of a typical city dweller for green space to be, literally, green.

Like “Green Party”, the term “green roof” was translated into English from the German. The extensive green roofs developed in Germany during the 1970s were not irrigated and were never a uniform green in the way lawns normally are. Although sedums, which dominate typical northern European green roofs, are green during the winter, they become carpets of yellow and white when in flower in spring and early summer and turn red when dry. Those who have sought to create biodiverse, low-maintenance habitats on roofs, have preferred to use the term “living roofs” or “eco roofs”. These living roofs of drought tolerant wildflowers and grasses are usually the various shades of green, yellow, and brown familiar to those of us who spend time in more natural environments. However, the term “green roof” is now here to stay, along with the common misconception that green roofs, like other forms of green infrastructure, should be green. I still see proposals to irrigate extensive green roofs, which indicates, on the part of the proponent, a failure to grasp the concept of “green” as an application of ecological knowledge.

This will require a global effort, where each bioregion rediscovers its indigenous flora and re-invents its urban green space. Horticulturalists and others who have traditionally been concerned with ornamentation or single-purpose landscapes will need to work with ecologists to assist in the creation of functioning urban ecosystems, where biodiversity is restored. 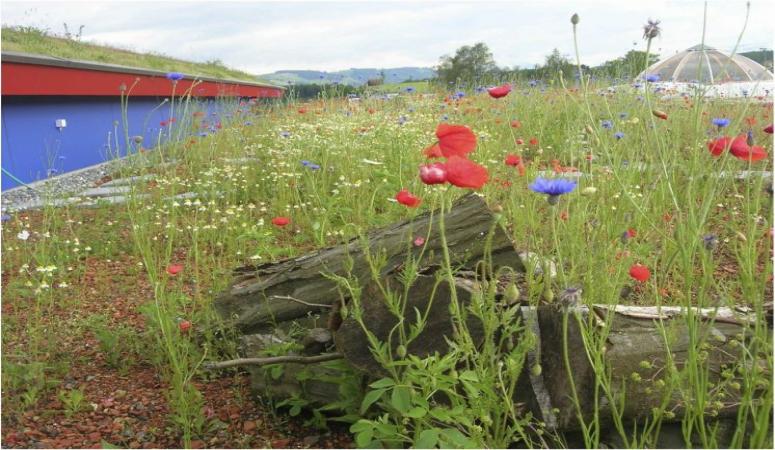 A biodiverse extensive green roof in Switzerland that is neither green nor brown. Photo: Dusty Gedge

There are some promising signs. Ecologists in Switzerland, for example, understood that the exposed dry conditions on green roofs could be important habitats for rare spiders and beetles, and they pioneered research and guidance that has influenced others in Europe and North America. In England, London’s green roof advocates coined the term “brown roof” for biodiverse green roofs designed to mitigate for the loss of brownfield habitats. However, one of those advocates, Dusty Gedge, now discourages use of the term—not because of color, but because of the way in which the concept has been misinterpreted and standardized into an unsatisfactory formula by some designers and builders.

The Dutch pioneer, Thysse, wanted to ensure that people had access to native flora by planting it in parks. These so-called “heemparks” are exemplified by the park named after Thysse in Amstelveen, which was implemented in three phases between 1945 and 1972. Thysse addressed objections to the use of native plants that people expected would have a messy appearance by planting in a deliberately stylized way. Progress has been slow; however, there have been many projects inspired by the heemparks. A recent example is Taikoo Place in Hong Kong, where the rich native sub-tropical flora has been brought to a space hemmed in by high-rises. It may not be designed to provide the full range of ecosystem services, but the use of Hong Kong native flora is a new level of sophistication.

An ecological approach to the daylighting of lost rivers or the restoration of water bodies has seen more success. Wetlands are easily damaged by the spread of invasive, non-native species. Invasive, non-native species have spread rapidly in aquatic environments all over the world, driving indigenous species to local extinction and causing billions of dollars in damage. Due to this pattern, designers working on river and lake restoration projects in cities tend to choose their planting palletes with care. Restoration invariably involves the eradication of exotic species, and continuing control is usually necessary; however, the re-profiling and re-planting of urban river banks has had seen many successes and has restored ecosystem services and biodiversity to some particularly urban settings—including, for example, the Bronx. This may be blue infrastructure, but it is an example of urban greening, because we don’t have urban bluing (as of yet).

The management of surface water, with the creation of features such as rain gardens, is also an important factor in the development of green infrastructure soil and planting design. Soils need to be amended to ensure that they are free-draining and plants must be selected that are drought tolerant (rain gardens that may remain dry for long periods), yet able to withstand temporary inundation (rain gardens that may hold water for a few hours following heavy rain). These demands mean that designers cannot rely on conventional ornamental planting pallettes. The “rain garden people” recommend native plants for these purposes, and emphasize the importance of planting for beneficial insects and animals, so that rain garden provision involves the application of ecological wisdom, in the alleged spirit of the “Greens” themselves.

With courtesy of ‚the nature of cities‘