The Biotope City Quartier Wienerberg – what is so special with it? 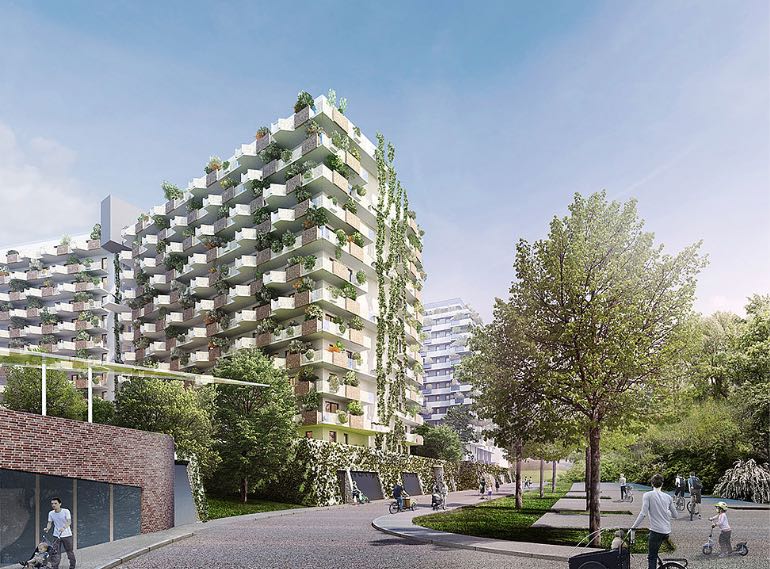 Biotope City Wienerberg is a neighbourhood that has broken new ground in many areas. In this it is part of the great tradition of Viennese housing construction, which for 100 years has repeatedly gone far beyond what was common practice in housing construction at the time with large projects.

Let us recall the Viennese courtyards of the 1920s, in which workers’ housing was self-confidently staged as a major category for the first time. The best-known example of this was the Karl Marx Hof. It, too, was characterised by what has been typical of Viennese housing to date: a focus on social housing, high density, extensive communal spaces and a recreational outdoor area. Another outstanding example is the Alterlaa housing estate (architect Harry Glück), which was built in the 1970s and still enjoys great popularity today with its 4,000 flats in social housing: long waiting lists for vacant flats, swimming pools on the roof and indoor pools inside, numerous common rooms for the residents. Up to the 14th floor, every flat has a large balcony with a 5 m2 plant trough – troughs that are lushly planted throughout and passionately tended by the residents. It is no exaggeration to say that this is probably the only mass housing complex in the world that has no social problems, no vandalism, no crime – on the contrary: more than 30 associations, even its own radio and TV station are run by the residents.

The Biotope City Wienerberg is now part of this context, initiated with élan and vigour by Harry Glück, who has taken up the concept of the Biotope City, the dense city as nature, which is propagated by the Biotope Foundation as an answer to the major global changes in the framework conditions of our urban life.

Flyer for citizens in the neighbourhood for the first participation meeting in 2014 – the photo shows the area cover by CocaCola factory halls.

2021 View of Biotope City Wienerberg from the north, the residential part of the quarter shielded from the busy Triester Strasse by the Bureau building and the hotel.

990 underground parking spaces under the buildings, leaving deep earth cores between the buildings free for the roots of large trees.

Only 40% of the 5.4 hectare site is sealed and largely car-free.

The Biotope City concept takes these developments as a basis for planning cities and urban districts of the future. After all, building investments should not only offer a pleasant living environment under conditions at the time of their completion, but also in the decades to come.

Façade greening also perfect for cooling the surface of the building : 28ºC cooler than without green – important for night cooling !

Many spaces for urban gardening for tenants and owners

Result of all this on hot days: