First forest tower in social housing – planted in the Netherlands 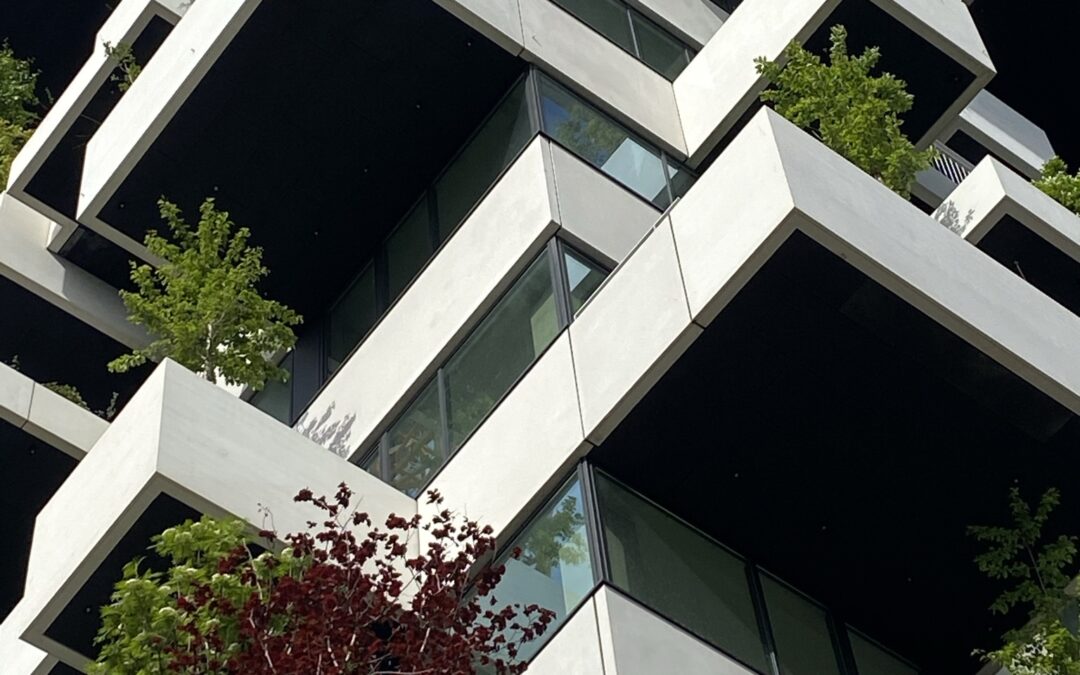 Largely unnoticed by the experts, a special feature in the field of housing stands in Eindhoven, the Netherlands, a city of about 250,000 inhabitants: a Dutch ‘Bosco vertical’ – but not for rich residents, like the world-famous building in Milan, but a Bosco vertical in social housing. Almost unbelievable that this is possible – but it is built and, moreover, under the tight financing possibilities imposed by Dutch social construction. Also in terms of aesthetics: the building leaves nothing to be desired – just this that the wider professional world has not yet turned its attention to it. Only we seem to have noticed this and have published an article about it – not least because our Harrie van Helmond, a Biotope City advocate from the early days, lives in Eindhoven and also has his bureau there. Harrie van Helmond doesn’t just look at this building from the point of view of a sensation in the housing industry, but examines it for its broad ecological values: Nature in the dense city. Now, after completion and full occupancy, Harrie van Helmond, together with Jannie Landa, specialized in ecological questions of planning and building, has taken up the pen again; together they have made a quasi up-to-date evaluation of this great project – and once again found their earlier criticism confirmed.

Two years ago, we wrote an article on the start of construction of the Trudotoren on StrijpS in Eindhoven. Stefano Boeri’s design is a variant of the Bosco verticale in Milan, but in this case built within the social housing sphere instead of the overpriced flats in Milan. Client Trudo deserves all the praise for this and soon camera crews will visit the almost finished building. We were allowed to go up the tower together with the green contractor Dupré.

Our earlier article ended with:
In many ways, the Trudotoren is a pilot project. Hopefully, an ecological approach can still lead to more biodiversity. For future projects, it is imperative that clients and their designers consider ecological principles as equally important as aesthetic values. It is not difficult. It’s just a matter of realising that it can be done and then doing it. If that is a paradigm shift, then so be it!

Unfortunately, after our previous article, the architect could not be convinced to select the plants, which had not yet been firmly chosen, after all primarily on the basis of their ecological performance. We had asked for this after we had examined the selected tree species for their ecological quality and found that unfortunately they will not contribute much to the biodiversity in the StrijpS area where the structure is located. The supplier of the plants and tree species also shared our criticism and would have been happy to revise his order again from an ecological point of view. To the green contractor’s regret, this other, more ecologically sound view was not up for discussion. Once again, there is a lack of awareness among designers, builders, and plan reviewers that we need to drastically redesign our living environment for the health of people, animals, and the planet itself, and that a holistic ecological view is absolutely necessary. In part, of course, it may be due to a lack of knowledge. The planting of buildings themselves, not the open space and buildings around them, is still uncharted territory for architects, even green companies. Buildings with trees and shrubs on balconies are a way to combat heat stress. But they can also undeniably help increase biodiversity. This opportunity should be seized!

An implementation plan for Strijp S as a climate resilient area was prepared in 2017 for the entire planning area. It was decided not to set strict targets, but only to provide this target for guidance, which should allow for a more flexible approach. The term “biodiverse” hardly appears in this plan , i.e. only implicitly. Apparently, it was assumed that greening would automatically lead to greater biodiversity and ecological quality.

The new torenallee is the green artery of the area; it has turned out fantastically well and on hot days you can see that people stay here in the otherwise very stony and thus overheated surroundings.

But according to that implementation plan, all roofs of existing and new buildings should be greened. So far, that is not the case.

Looking from the top floor, it is striking how many opportunities there still are to go green in Strijp S.

Despite the requirements that are imposed when an environmental permit is issued, we see little or no structural greenery in the new buildings. The residents will have to do that themselves.

Fortunately, there are some nice exceptions: the SpaceS project, the roof gardens on the Anton and Gerard buildings, the moss roof on the Klokgebouw building, the overgrown façades of the railway car park and, from now on, the Trudo tower.

A bird’s nest has already been spotted in one of the trees on the balconies of the Trudotors. It is important that the young birds have enough insects available immediately. The question is whether the supply on these balconies and in the immediate vicinity is sufficient for them to survive. We will continue to monitor how things develop and how residents participate in the planting – tolerating and supporting the insects, spiders and birds that emerge. Although this was not the original intent, we are now looking for ways that residents can still participate in the maintenance.
The planting above the so-called Leidingstraat – right next to the forest tower – will be partially replaced to create more of an experience. The original design was by Piet Oudolf – a great garden architect for ground level open space – but different laws govern the greening of buildings. More volume is sought with the new design with hanging and evergreen plantings. To conclude, the urban green needs greater attention and concrete action for a holistic bio-diverse green quality is – that is of great importance for people, plants and animals. It is not just about green aesthetics and not just about heat stress. This comprehensive ecological approach does not cost more money, it just requires more attention.

Green roofs in the area of the forest tower

The roof gardens of the transformed factory buildings Anton and Gerard: thanks to a new foundation, a serious substrate layer could be applied to the roof here to enable tree growth. It functions as a favourite hang-out of the users and residents of both buildings, with beautiful views.

Moss mats placed on the roof 12 years ago on the Klokgebouw (former Philips factory of a.o. Philite):  have unexpectedly and to our great surprise caught on very well.

The high-quality public transport line runs at Strijp S through a green tunnel of Blue Rain, a beautiful design by West 8.