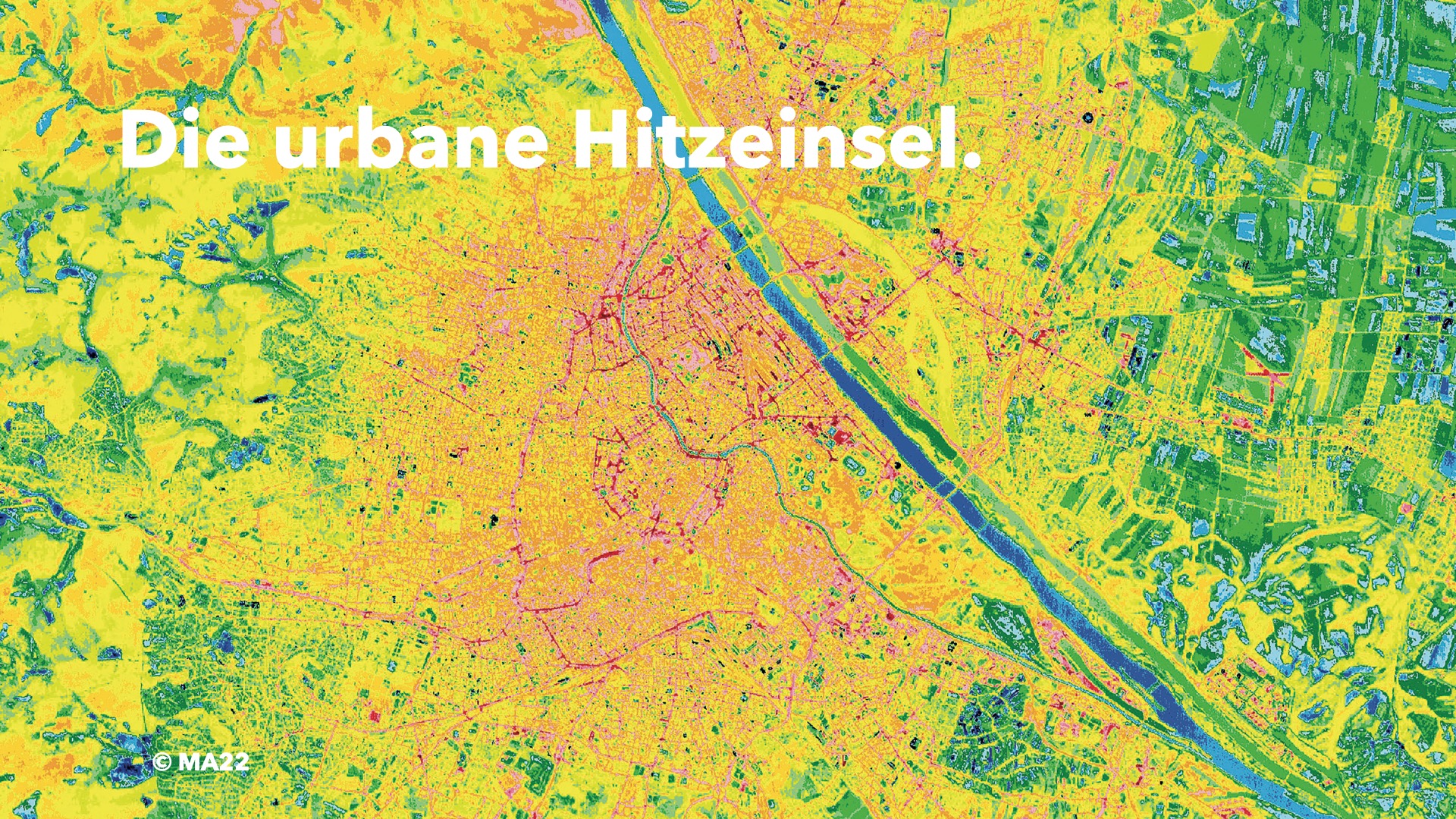 Housing in a climate emergency – cautious or radical?

Contribution to the symposium ‘Perspectives for the future of housing’.  Vienna 27.2.2020

What does radical mean? What does cautious mean? There are two types of approach: one that is short-term and primarily business-oriented, and one that is far-sighted and comprehensive.

Even the climate emergency is not the same everywhere. In Austria this means long periods of heat, heavy rainfall, storms. On the sea coasts it is different. There, the climate emergency is moving the minds primarily because of the rising sea level. This could be 2m higher by the end of this century. Dutch oceanologists have presented a rescue strategy that is currently being discussed in specialist circles: the embankment of the entire North Sea, with a dike from France to England and from Scotland to Norway – to secure the coastal cities of the North and Baltic Seas. The cost would be 300-500 billion, which would have to be shared by the 15 countries bordering the North Sea. Radical. But of which of the two variants?

What would be a far-sighted solution?

My proposal is: the Biotope City concept. Let the dense city become nature. To cover the cities as far as possible with leaf green.

The merits of chlorophyll are well known:

Leaf green makes a significant contribution to reducing heat, as well as to rainwater retention, it slows down wind, absorbs noise, binds CO2 and, as a bonus, promotes the so important threatened biodiversity.

That means: a good an easy solution could be, in other words: re-naturing the city. Not as a garden city, but as a densely built and yet intensively greened city. I call this the garden city of the 21st century.

The logical consequence of this is that built structures and exterior spaces are largely covered with foliage green – i.e. green roofs, green facades, open spaces with as many trees and gardens as possible, and traffic access in new buildings largely underground to increase the areas available for green open space.

It is the most cost-effective measure against the climate emergency.

Moreover, it could be implemented immediately and would be climate-efficient after a few years of growth.

Is that radical? Or is it actually cautious? But above all: is it realistic? Is it affordable?

It is affordable and is already being implemented in Vienna – in the Biotope City Wienerberg, which will be completed by the end of this year. A candidate pilot project of the IBA Vienna. The first residents have already moved in. 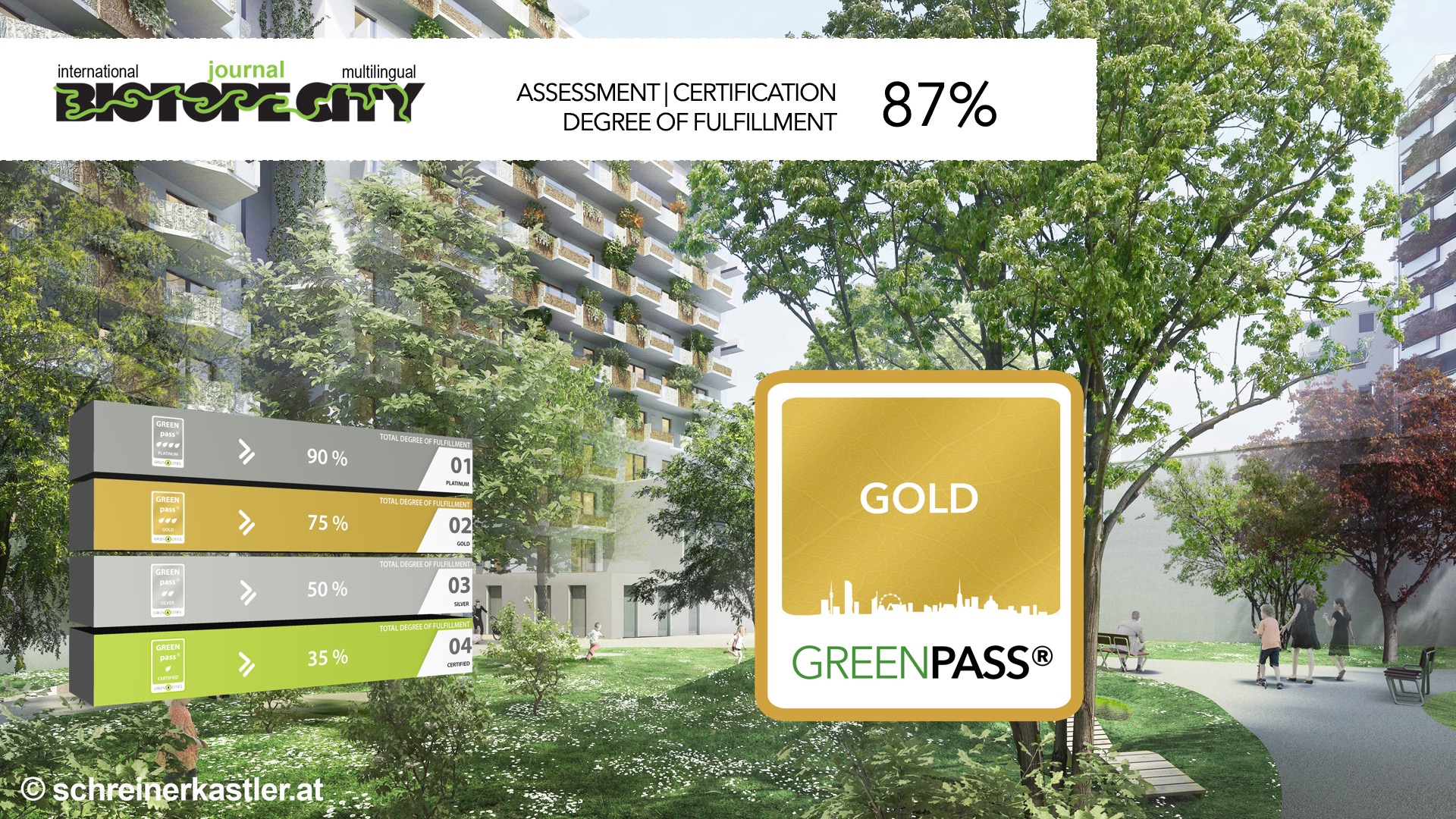 The project in keywords:

Dense development on 5.4 ha, 1,000 residential units, 650 of which in the social sector, centrally located common rooms and local amenities, day-care centres, a school, offices, a hotel. The buildings are extensively greened on roofs and facades; large-crowned trees throughout the open space; meadows and perennials and shrubs that are highly biodiverse and require little maintenance instead of the traditional lawns; and private and community gardens for urban gardening. cycle paths. Cars underground, access roads for firefighters only. All this is affordable within the budget that is usual in Vienna.

This quarter is planned and built according to the Biotope City concept.

the regenerative mechanisms of nature will be used to cope with the climate emergency: Climate regulation and the absorption of fine particles and pollutants through leaf green and CO2 fixation in plants.

The Biotope City Wienerberg will thus become significantly cooler; winds flowing through it will even have a cooling effect on the surrounding city.

It also has good social consequences:

the nature-near movement spaces directly in front of the front door and the experience of nature and the possible active contact with nature have a positive effect on health and psyche and promote the coexistence of the inhabitants.

And last but not least: the biodiversity is strengthened due to a consciously indigenous choice of plants.

The concept is being implemented by 7 forward-thinking housing associations who are aware that the Biotope City model will maximise the future value of their investment.

During the cooperative development of the master plan for the area, the quality criteria of a Biotope City for this location were specified and legally established in a detailed catalogue. This was then, after approval by the city, the basis for the further development of the buildings and open space. Right from the start, the simulation of the microclimate using the Greenpass method was also on board.

But what does this mean for the implementation? After all, it is a real pioneering project that is breaking new ground in many areas.

But there was a stroke of luck:

A multidisciplinary research team, led by the University of Natural Resources and Life Sciences Vienna (Boku), has been following the entire process from approval to completion. This is extremely important, because at many points the realisation of this concept came up against the barriers of the commonplace and directives and regulations.

The research team was able to help

– in the more complex coordination and control;

– with information about solutions already tried and tested elsewhere;

– with the impetus to adapt guidelines, e.g. for fire protection;

– and it could initiate the preparation for the additional requirements for the property managers.

Detailed information on this and many other meriting projects can be found in the brochure ‘Hidden Treasures’ of Biotope City Wienerberg, which is also online on the IBA website and on the website of Biotope City Journal. 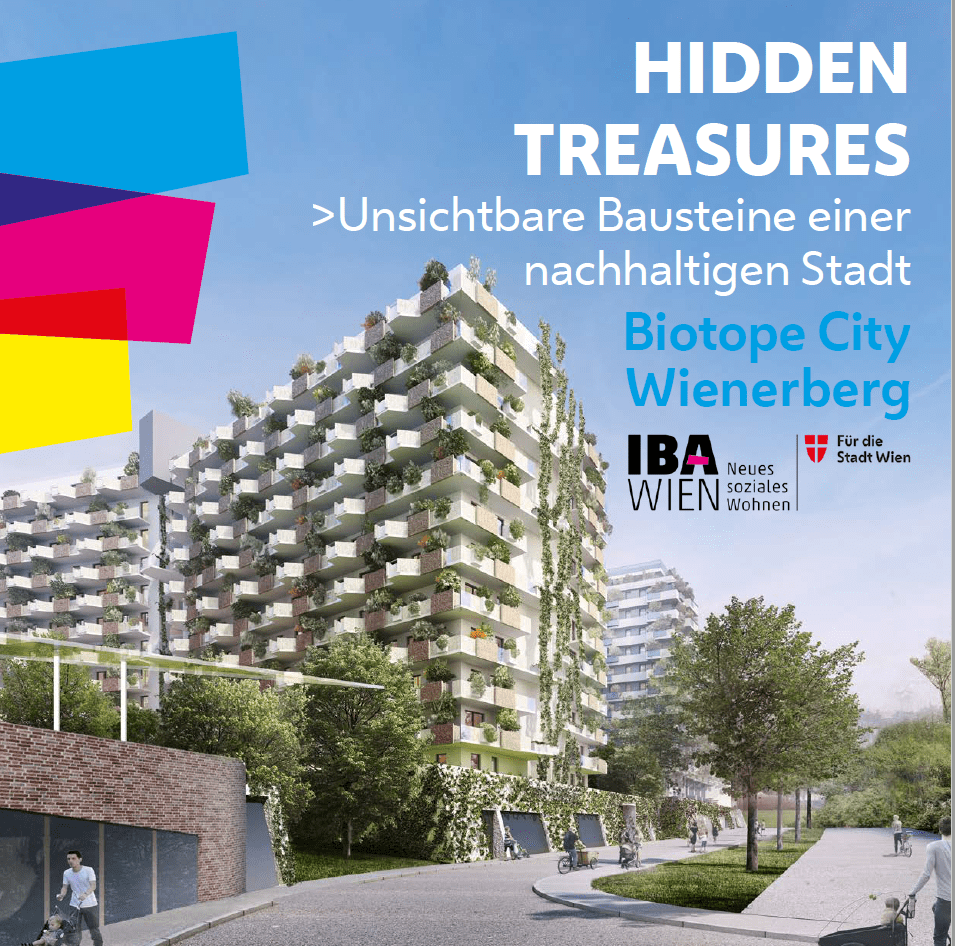 At the end of this year, the research team will present a catalogue of proposals for the modification of existing procedures, guidelines and regulations in a construction manual. That means a kind of script, a guideline, will be put on the table on how such a Biotope City can be realised. So future projects will have it much easier and will be able to do without the help of an accompanying team of experts!

Is a Biotope City now a cautious or a radical measure against the climate emergency?

I leave the assessment to you and can only say: In any case, it is a solution of the far-sighted and comprehensive kind! And it is affordable!

What would it mean for our future life in the dense city? Close your eyes for a moment – I will take you into the future of Vienna in the year 2120:

Everywhere in the streets there are gardens and many facades are covered with plants. There are only narrow lanes left. People move on foot, on bicycles, on scooters – for more extensive needs, self-propelled taxis rush silently to the scene on call; rare occasions a curiosum, a lovingly maintained old-timer from the diesel and petrol era, also drives along. Gardening has become the great collective urban thing, and in this way has contributed to a balanced society – despite its very heterogeneous composition. And Vienna has once again been declared the “world metropolis of urban nature”. 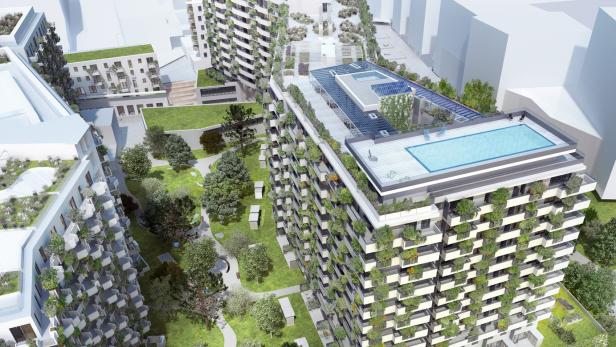