This text is now 10 years old, written under the impression of the economic crisis of 2008 and following years. If you read it today, it becomes clear that its urgency have only increased. This is the reason why the BCJ editorial staff brings it here. 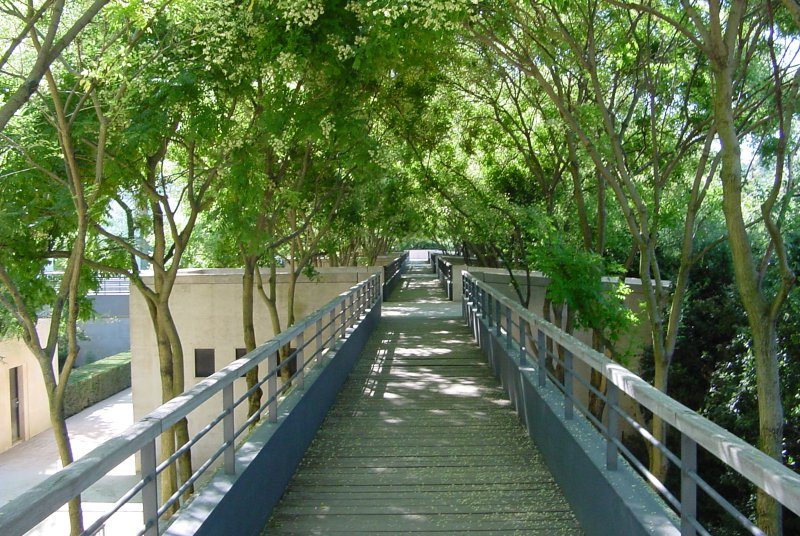 Deceleration means to recognize the expansion of time and space as a value that exceeds all other values obtained by the space-time contraction.

The value of this elongation is not visible to everyone. The reduction of transport time, the rapid succession of images, the absence of silence separating them, the rapid montage of scenes, the hectic succession of words in every radio broadcast, the unacceptable “white” in a presenter’s speech, the immediacy of the transmission of news on the net: all contribute to the impatience and intolerance of waiting. Slowness, synonymous with wasting time, is particularly stigmatised in any company where work efficiency is confused with full-time employment. Those who dream lose money… Between Limoges and Clermont-Ferrand, a train reduced to a single car covers the distance in a single, continuous line. It crosses admirable landscapes in great slowness, where forests open up on red peat bogs, where the relief soils dug by several streams acquire a wild equilibrium and a touch of “resistance” over time. I watched the passengers. None of them looked at the landscape. The most active ones “worked” on their computer screens, others took feverishly urgent notes, and others read. Some watched a video, others, the most indifferent ones, were busy with the keyboard of their mobile phones. The most tired ones slept or faked it. They all killed time.

Slowness is therefore an excess of time that must be eliminated at all costs. We do not know what to do with the pages in the timetable where nothing is written. How will we spend the holidays? Fear of the vacuum, vacuum of the mind. The void: impossible perspective. As for the time saved by the acceleration of transport, the speed of exchange and communication, there is nothing we can do but immediately reinvest it in a satiating and therefore reassuring activity. The leisure industry has taken advantage of the opportunities offered by leisure. The time saved is used to kill time elsewhere.

Space professionals – urban planners, architects, landscape designers and artists – are well aware of the techniques of accelerating or slowing down perspectives. A dark object and a light object with the same volume and identical shape are not perceived in the same way by the viewer at the same distance. The light object, optically expanded, appears closer than the dark object, optically contracted. The access to the light object therefore appears more immediate. A direct perspective bordered by walls of equal height appears shorter than a perspective of equal length bordered by heterogeneous elements, because the access to the borders of the field of view is immediate. A perspective slows down all the more the longer the view passes through it. A garden seems to be all the larger, the higher the number of events, the stranger the feeling of a journey, the more time seems to pass through the amazement.

The subjective writing of space resembles the trompe l’oeil, the optical illusion in theatre.

An objective deceleration, i.e. a measurable reduction of speeds – of all speeds – presupposes that the consequences of the deceleration have been recognized as a social advantage. The slowing down of the city means taking advantage of the length of journeys, the slowness of urban development and the use of a space that is not aimed at profitability, but at other values that the hectic, efficient and effective city cannot afford to develop.

Slowing down the city means reversing the values that determine current consumption mechanisms and that drive the market economy. One of the strong components of this economy is the almost immediate obsolescence of consumer goods. They have to be thrown away quickly to buy new, fragile, disposable products and so on. The short-lived economy is based on an ever-increasing acceleration of the buying impulse. At the same time, the acceleration of the buy-sell movement is leading to a stock market frenzy that corresponds to flash transactions. Acceleration is thus part of a productivist economy whose final stage – only waste and rubbish – is its inability to still perform trading functions,

real space, congested and disqualified when it comes to physical territory, and also

virtual space, congested and disqualified when it comes to mental territory.

In any case, the accumulated pollution poisons the planet garden 1), just as it drowns the brains of financial speculators in a fictitious flood of toxic products. However, the close ties that bind the real world and the virtual world clearly show how the latter – the world of speculators and gambling – runs the whole thing under the sole denominator of the race for profit.

The slowing down of the city should coincide with a de-pollution of (real and virtual) polluted space to make room for a space, but also for a time, the use of which would not produce any waste other than recyclable waste.

The use of recyclable space-time means asking the question of the finiteness of the planet every day, or at least acting in the awareness of its ecological and spatial finiteness. As far as I know, only a few rare civilizations with a slow nomadism have been able to develop in a recyclable space-time without changing the skin of the earth. I think of the African pygmies, the Australian aborigines, some Indian peoples… These people never had to slow down the city, they never had cities, they never reached the level of development that is the basis for obesity, irrational growth pathology, cancers… What would a recyclable space-time be for a world population living in megalopolises around the middle of the 21st century, when the population is approaching 9 billion?

The fact that we cannot evolve spatially ad infinitum (due to the spatial finiteness of the planet) imposes on us to recognize material negative growth (degrowth) as an inevitable next stage in the evolution of human society.

The occupation of space by everyday objects is part of the degrowth calculations. Nanotechnologies – in their best application – allow the least use of space for the most useful services. Yet even the most advanced and best technologies cannot avert this immense and fruitful destruction of the planet that architecture represents. 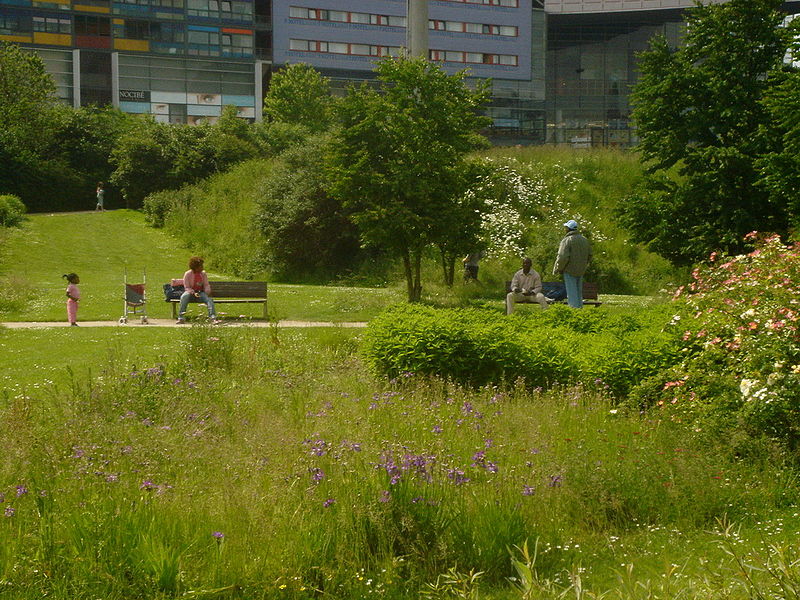 The growths of buildings, that means of architecture and its ordening matters – urban planning – enjoy absolute prestige in a world governed by the economic principle according to which “if the building is in order, everything is in order”. A gardener, on the other hand, thinks “if the garden is in order, everything is in order”, since one must first feed the world before one can even house it. However, the civilisation that promotes building and makes architects the masters of space is obviously not capable of housing or feeding the world. Demographic growth – a taboo subject – goes hand in hand with a proportionally ever greater and ever more worrying increase in the number of poor and malnourished people.

Adapting to the limitedness of the planet means – necessarily – demographic decline. Even if Jean Ziegler, FAO rapporteur, admits that this planet could feed twice as many inhabitants as it does today if agriculture were to switch to organic farming (which is possible) – the problem of non-renewable space forces us to consider demographic decline or at least stabilisation. However, the world economy operates exclusively on the principle of an increase in consumption, in which the number of consumers is as strong an asset as the ever faster repetition of consumption actions, to which the obsolescence of products is linked.

Slowing down the city, thinking of a non-destructive future for the planet, means at the same time rethinking the economy and demography.

Theorists, but also practitioners of alterglobalization have envisaged and (sometimes) carried out experiments that demonstrate the validity of new forms of economies and new practices. The Slow Food movement shows a different relationship to time and the quality requirements of products. AMAPs (2) correspond to an economic model of local production and distribution, avoiding long-distance distribution, which is responsible for the exorbitant environmental costs of each product transported. But although everyone knows or could know about the demographic problem, no one wants to regulate the future balance of the planet. The media, overloaded with topics of ecological and financial crisis, let economists, who have become superstars of the planet, have their say. Some are shy of mentioning the demographic question. Some, whose opinion I share, mention the need for knowledge. We cannot impose regulation by force (any form of regulation), but we can hope that something like this will prevail because of knowledge of its necessity. The slowing down of the city – the material negative growth – is thus directly linked to the increase of knowledge: to immaterial growth.

In the perspective of a society that inevitably ends with the destruction of the planet instead of preserving it and increasing its diversity, re-qualifying the basis of life, creating a recyclable space-time relationship without affecting the invalidity of the living – this is the model of global development that we must aim for. This implies material decline and demographic decline, which are closely linked in their dynamics. But we cannot imagine a decline that is tantamount to a loss or a return to something earlier. The mechanisms of evolution, however tentative, do not reproduce the old patterns. What, then, would be the compensation for the abandonment of growth that the societies of tomorrow proclaim?

By slowing down the city and giving the time-space expansion a value greater than any other value achieved by space-time contraction, one increases the capacity to live in an immaterial way – these are the material gifts of time and space.

What can we do to open up these new ways? We use only one eighth of our brain. What do we do with the other parts?

Our civilizations, immersed in the attractive world of exact sciences, oriented towards technological achievement in the desire to master nature, space and time – have they not ignored an essential part of the human capacity, namely that of perceiving the environment and also communicating with a medium other than the mind? Have they not left art to the fleeting pleasures of provocation in order to hand it over to the commercial networks, forgetting art’s function as a universal medium? Are they not in the process of dumping the cultural space into a vulgar and stupid amusement park?

In my view, gardening in the ‘jardin planétaire’ of the future depends on more and more knowledge in order to gain by non-interference. This kind of gardening costs less energy, in contrast to the nature, in the same place, to become more or better results.

The slowed down city – the gardener’s house – would be the one where we spend the least to get the most, where we move the least to meet the best.

In my ideal government, the first ministry is the Ministry of Knowledge. All the other ministries, nested according to the political project of growth, are based on a revised economy without political decision-making power, while the highest position, that of the shared knowledge ministry, directs the decisions of governance. These have nothing to do with the market, but with art and culture, with everything that shapes the history of humanity, the immaterial of the intangible and dreams. 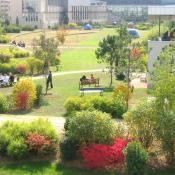 (1)  Reference to the concept of the ‘Jardin planétaire’ developed by Gilles Clement to draw attention to the great global context of the planet Earth, which is to be planted as such a great context. (Editors)

(2) The so-called AMAPs (Associations pour le maintien d’une agriculture paysanne) aim to promote regional and organic farming and to remain competitive with industrial agriculture. The principle of the AMAPs is to establish a direct link between producers and consumers in order to distribute agricultural products locally, without long transport routes and at a fair price. (Editors)