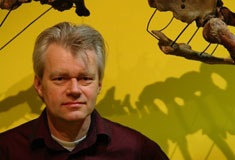 Jelle Reumer is emeritus professor of Vertebrate Paleontology at Utrecht University. He studied biology with a specialization in palaeontology and obtained his PhD in 1983 with a dissertation on fossil shrews. He worked from 1984 to 1986 at the University of Geneva on the taxonomy of African claw frogs. From 1987 to 2015 he was director of the Natural History Museum Rotterdam, which under his leadership has undergone a spectacular metamorphosis: from a sad and inconspicuous museum in Blijdorp Zoo to a dynamic museum on a cultural top location.

In February 2005 he was appointed Extraordinary Professor of Vertebrate Palaeontology at the Faculty of Geosciences of Utrecht University, a position that was later transformed into an ordinariate. Jelle Reumer is particularly fascinated by evolution and ecology, and the interaction between the two, which has enabled life to develop in all its diversity. According to Reumer, palaeontology is an eminently suitable science for this, because it registers and interprets the development of life. He published an impressive number of scientific and popular science articles as well as over fifteen books, such as Stadsecologie (Urban Ecology, 2000), Plant je voort (Reproduce! 2003), De ontplofte aap (The exploded ape, 2005), De vis die aan land kroop (The fish that came on land, 2014), Wildlife in Rotterdam (2015), and Natura Morte (2018).