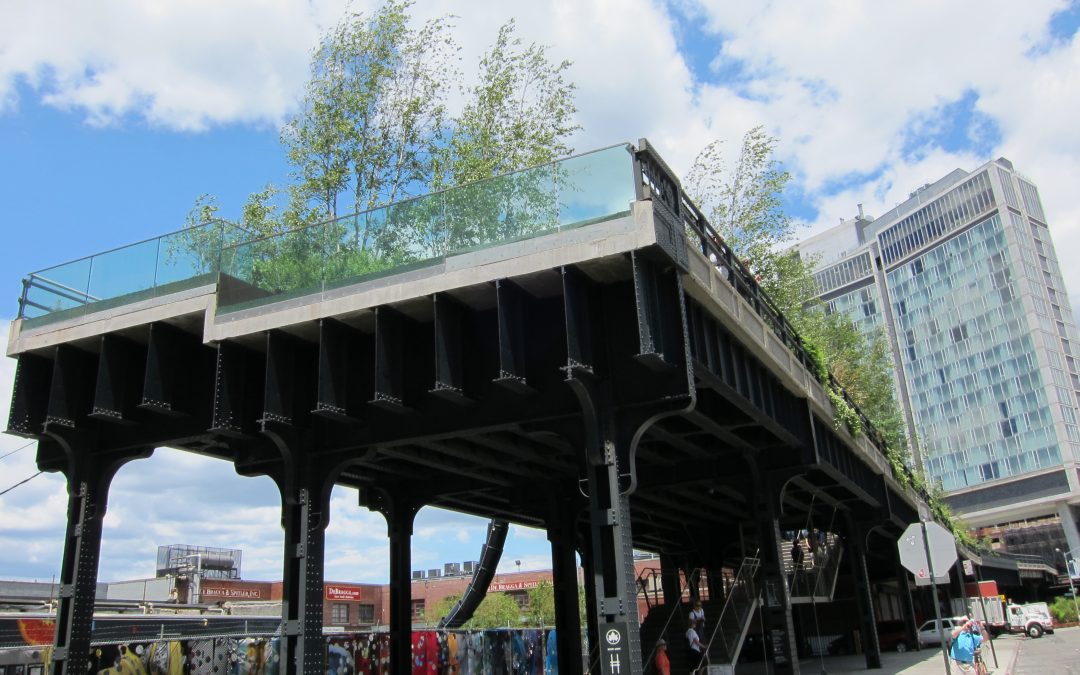 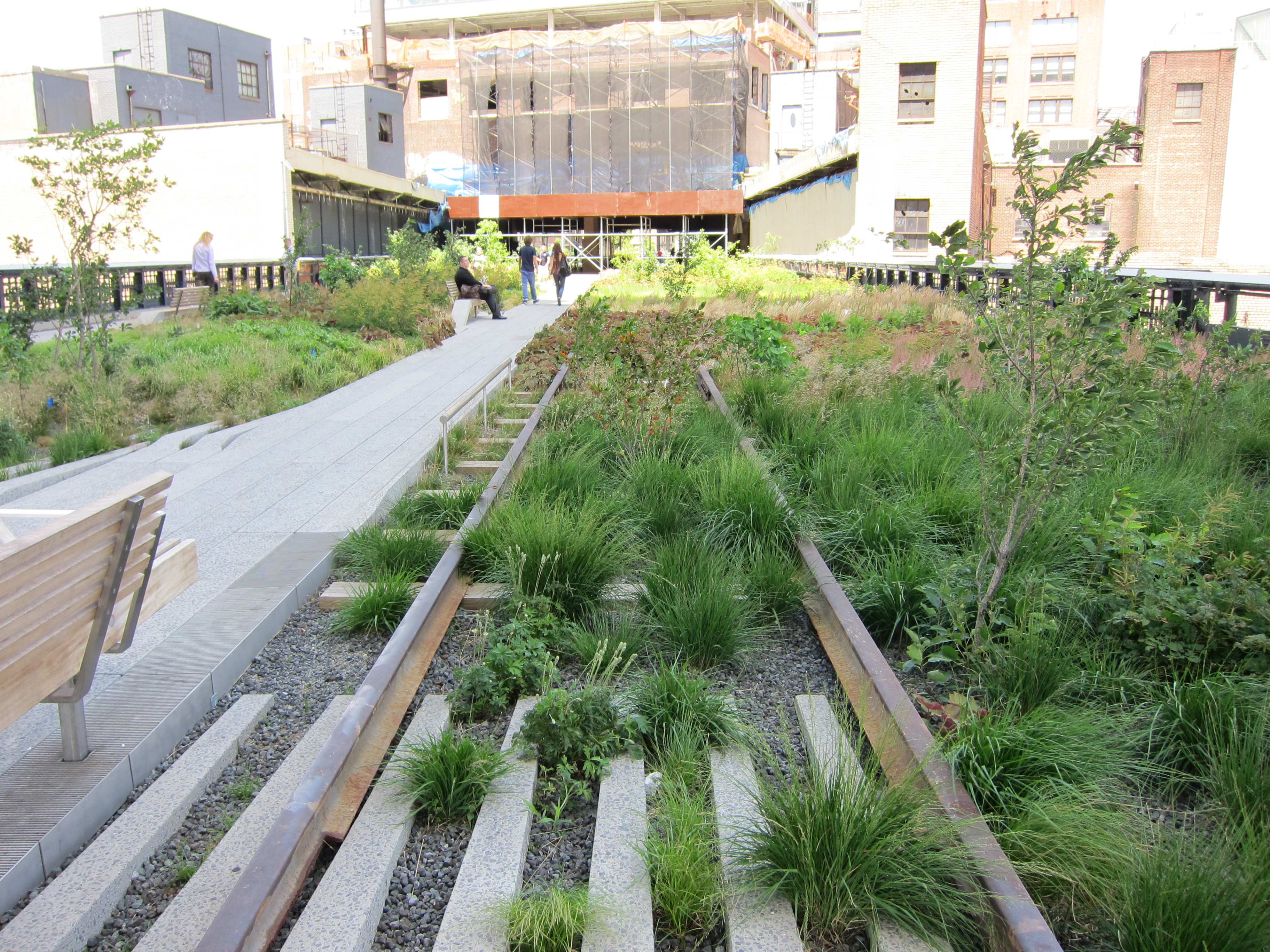 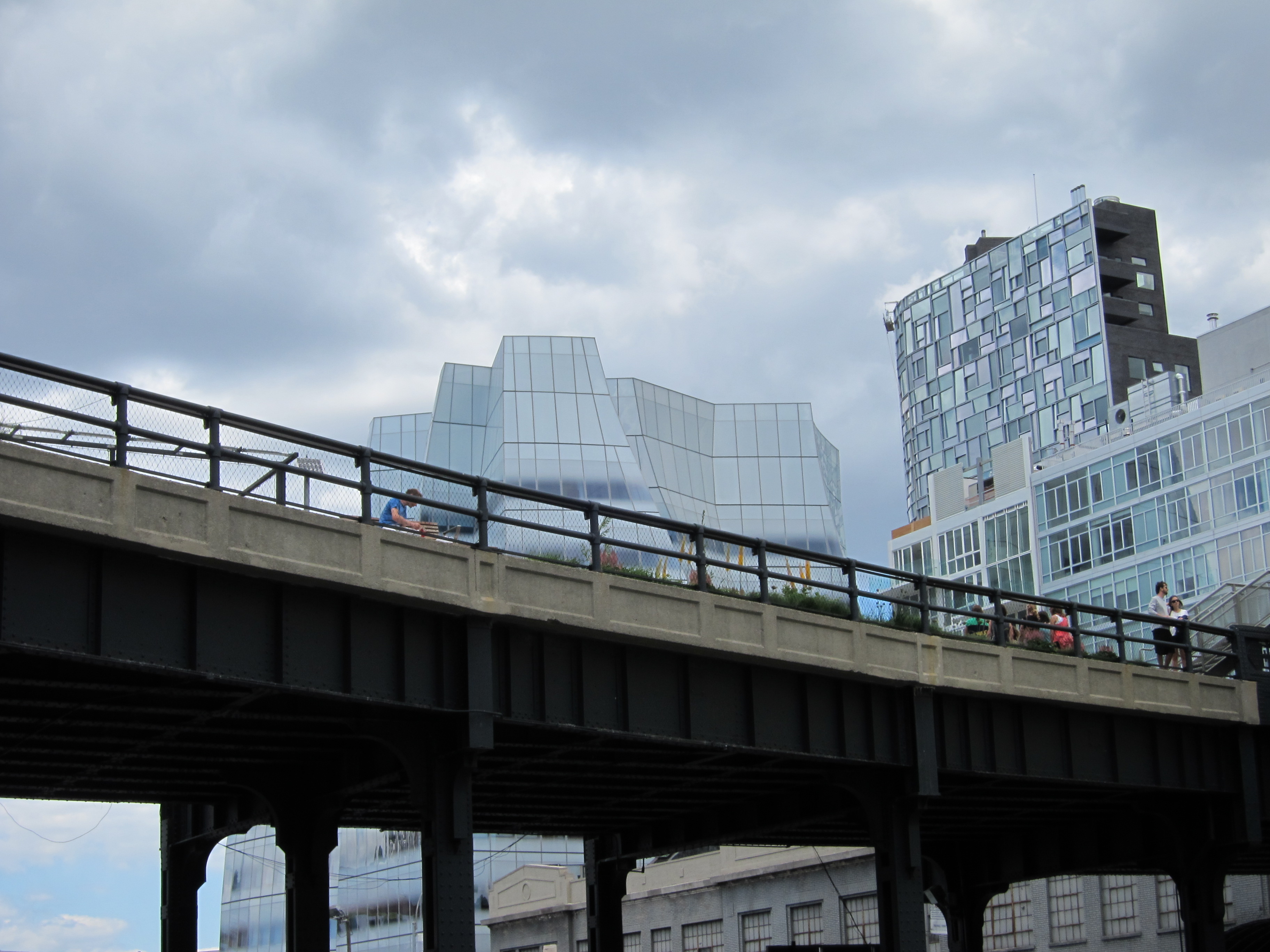 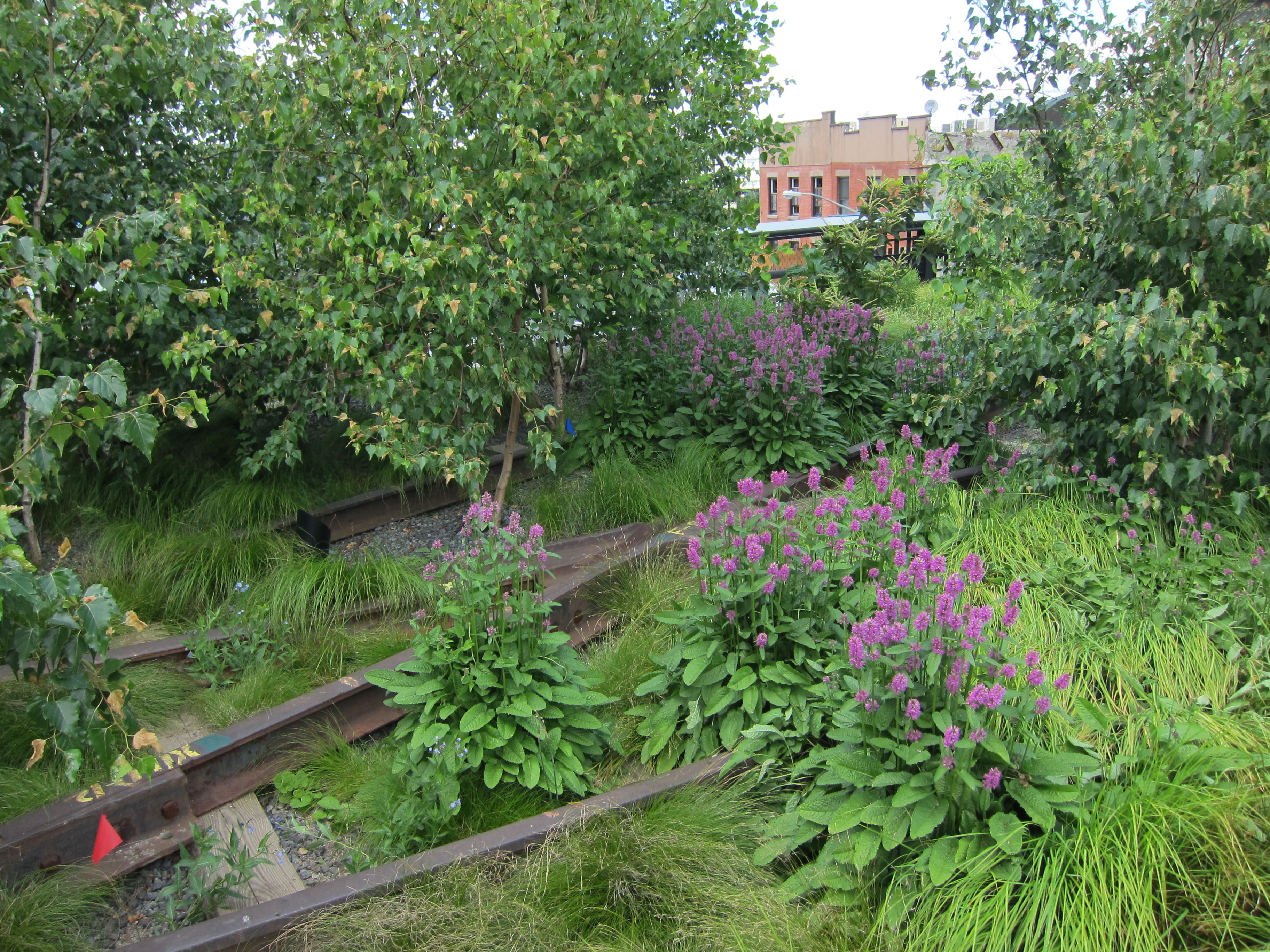 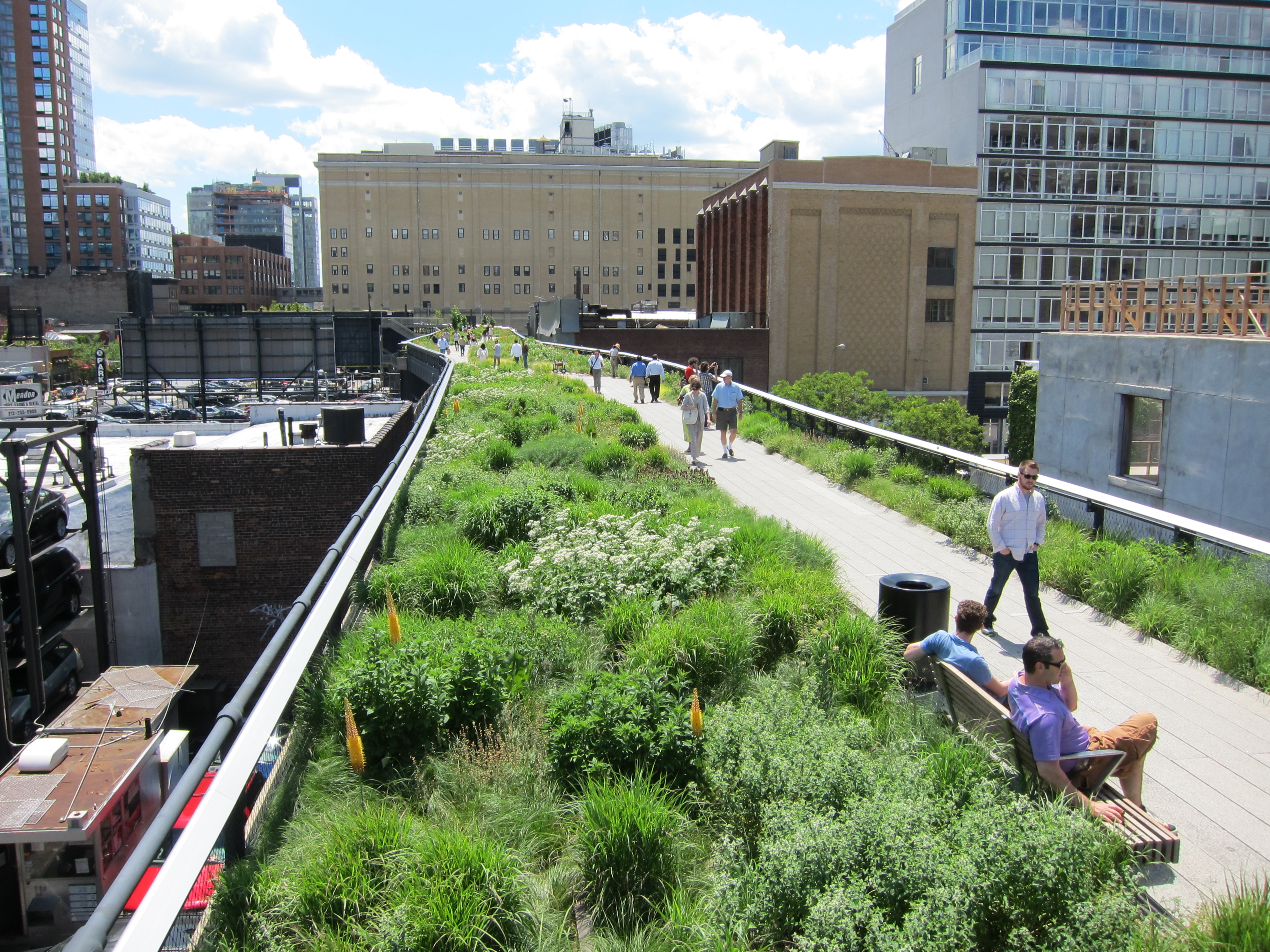 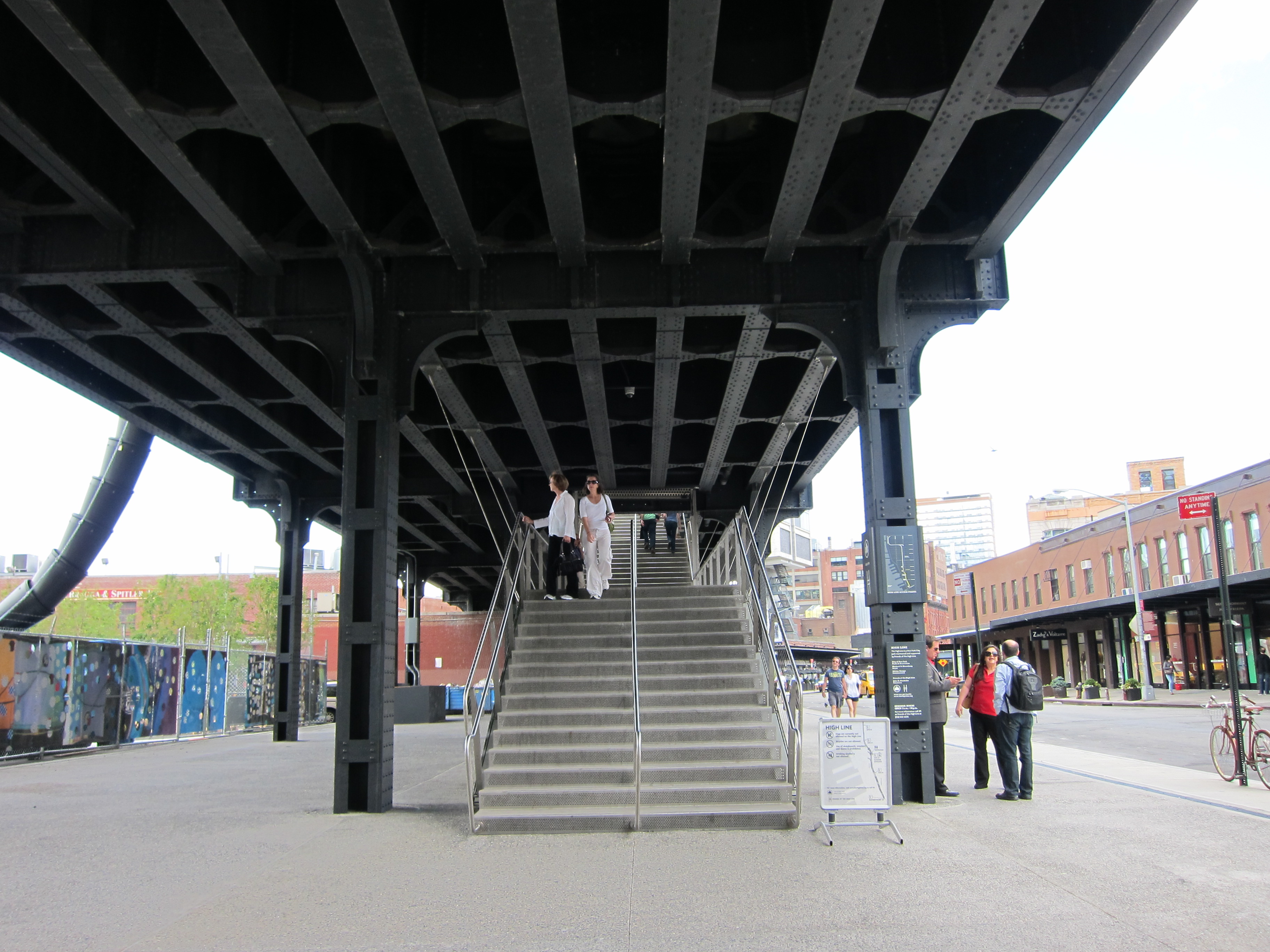 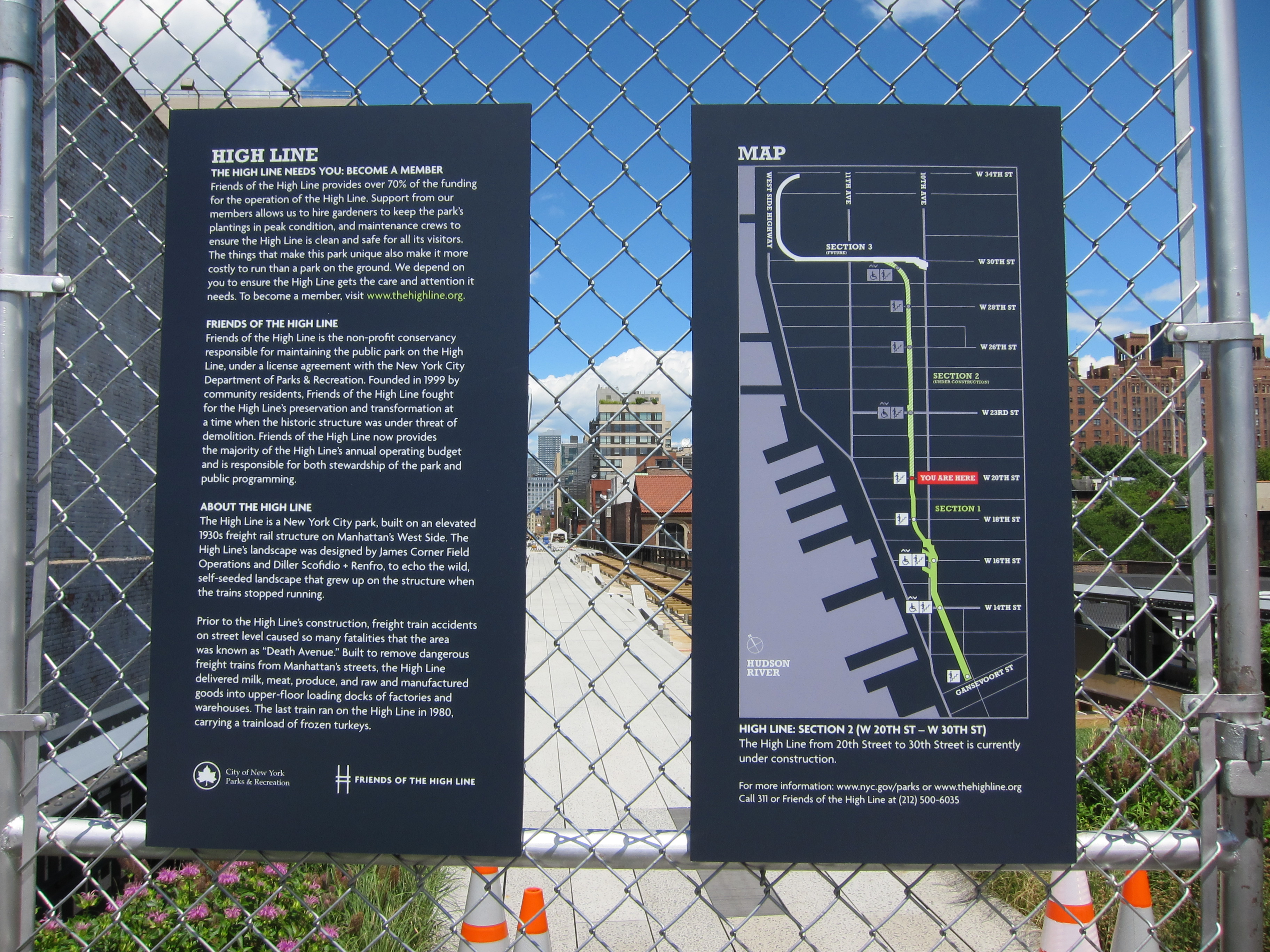 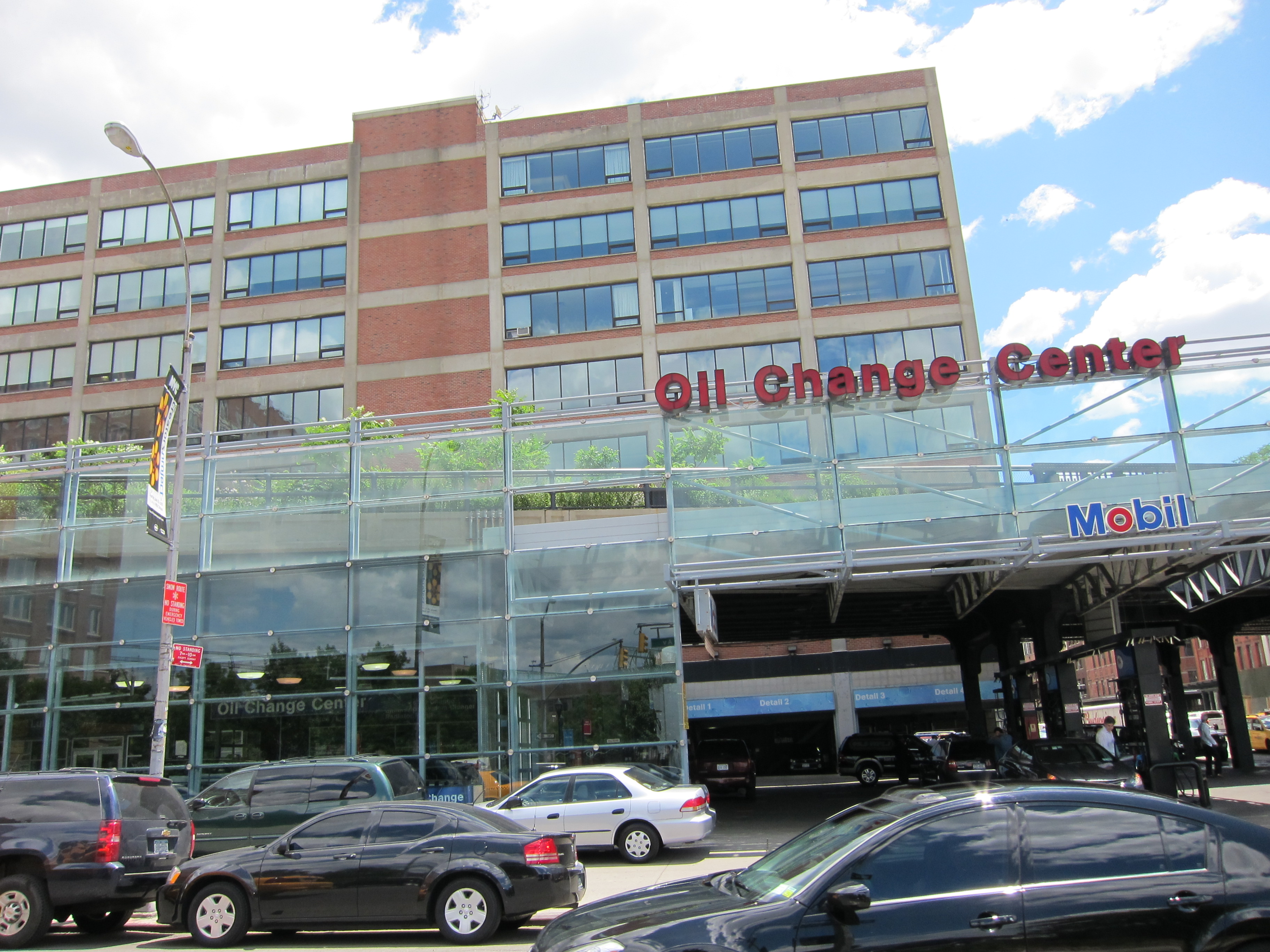 „…The High Line was originally constructed in the 1930s, to lift dangerous freight trains off Manhattan’s streets… Friends of the High Line (founded by Joshua David and Robert Hammond, residents of the High Line neighborhood, to advocate for the High Line’s preservation and reuse as public open space) is the conservancy charged with raising private funds for the park and overseeing its maintenance and operations, pursuant to an agreement with the Parks Department. When all sections are complete, the High Line will be a mile-and-a-half-long elevated park, running through the West Side neighborhoods of the Meatpacking District, West Chelsea and Clinton/Hell’s Kitchen. It features an integrated landscape, designed by landscape architects James Corner Field Operations, with architects Diller Scofidio + Renfro, combining meandering concrete pathways with naturalistic plantings. Fixed and movable seating, lighting, and special features are also included in the park…“

So the friends of the High Line on their website. Meanwhile, the High Line is a real success. Already two million visitors among them professionals from all over the world. A couple of North American cities are on the point to start with similar projects. You will find a broad description of the Highline story in the New York Times 15/7/2010

Nevertheless, there are also critical voices. Disappointment because of a missed chance to preserve real wild nature in the city. One of them is the New York artist Egon Zippel. He sent us the following note:

The idea of the preservation of the High Line as a public park was, at the outset, grand. When I went there for the first time after its inauguration to take photographs my concern grew as I was confronted with a few grumpy gardeners watering the plants of a completely manicured high-maintenance suburban-like garden. It was as though The Hig lLine design team had suddenly announced, „Let’s do some gardening“. Add to that the possible interest of a few high placed New York City Park commissioners and you have a recipe for, well, just another standard squeaky clean park.

Don’t get me wrong: It is prime real estate, and to get the city of New York to dedicate it as a public park instead of selling it to a developer is already an admirable feat.

Here the design team’s „planting master plan“:
„The High Line’s plantings are inspired by the self-seeded landscape that
grew on the out-of-use elevated rail tracks during the 25 years after the
trains stopped running. The 210 species of perennials, grasses, shrubs, and
trees on Section 1 were chosen for their hardiness, sustainability, and
textural and color variation, with a focus on native species. Many of the
species that originally grew on the High Line’s rail bed are incorporated
into the park landscape. The landscape also emphasizes diversity in bloom
time, with Section 1 plants blooming from late January to mid-November…“

Also here, as often, less could be more: instead of preserving at least some parts of the existing symbiotic flora and fauna that had naturally occurred on the High Line in the last 25 years, everything was razed! An enormous budget supported the entire project as a sizeable gesture, completely mixing everything up sans the fauna and presto, another nice project for the portfolio. NOTHING was left of the previous charm, and all of it made digestible for the distinguished city slicker. That’s where the ‚theme park‘ comes in.

What could have been the alternative?

Imagine the High Line with its twenty-five years of natural growth of flora coupled with the natural occurrence of fauna. Now, imagine little signs describing the flora and its‘ attraction to a particular animal and/or insect. This would have been a perfect way to teach visitors about the wonders of living and sharing their lives on the High Line. Classes of school children would be brought there to learn about nature, opening doors of understanding and closing the gap between nature and us. This would also have saved a lot of money, all they needed to do was to make it securely accessible and to make innovative and informative signs.

What do we do?

We need to learn to sometimes leave well enough alone. If an area destined to be park already has naturally occurring flora and fauna then we as architects, landscapists and designers must be obligated to learn the lay of the „land“ whatever that land may be, be it in the form of a High Line or empty lot or what have you. We must be obligated, as well, to learn of the locally occurring flora and fauna and support it not destroy it. Only then can we say we are working with nature instead of against it. 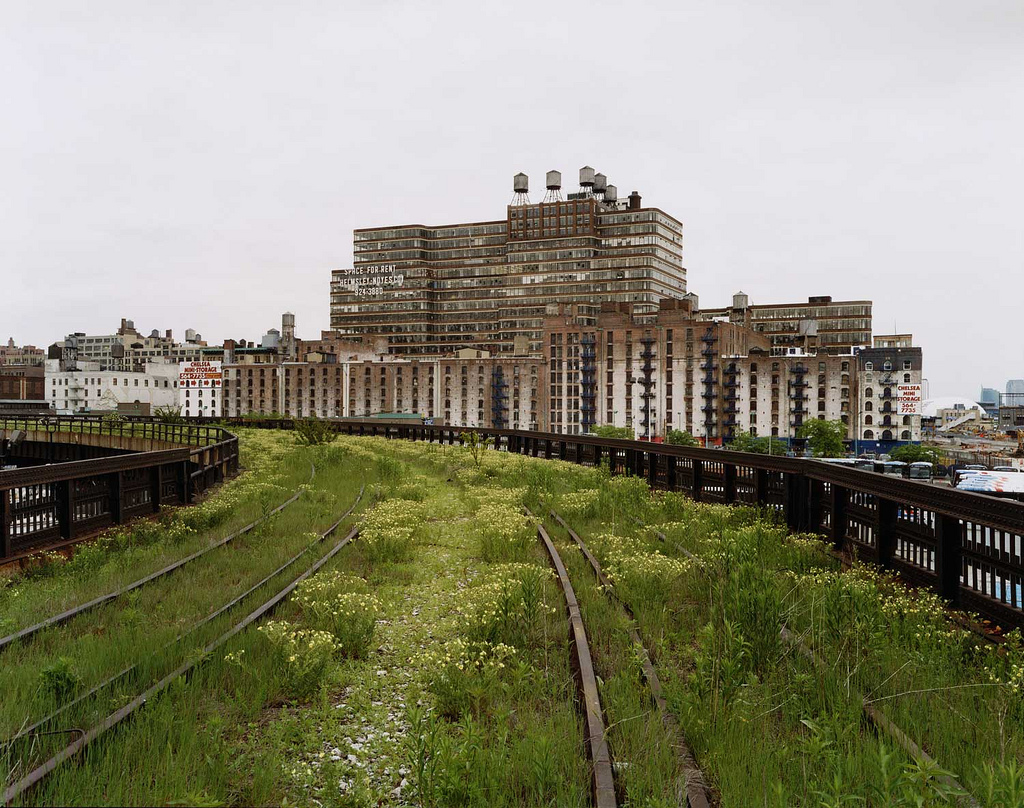