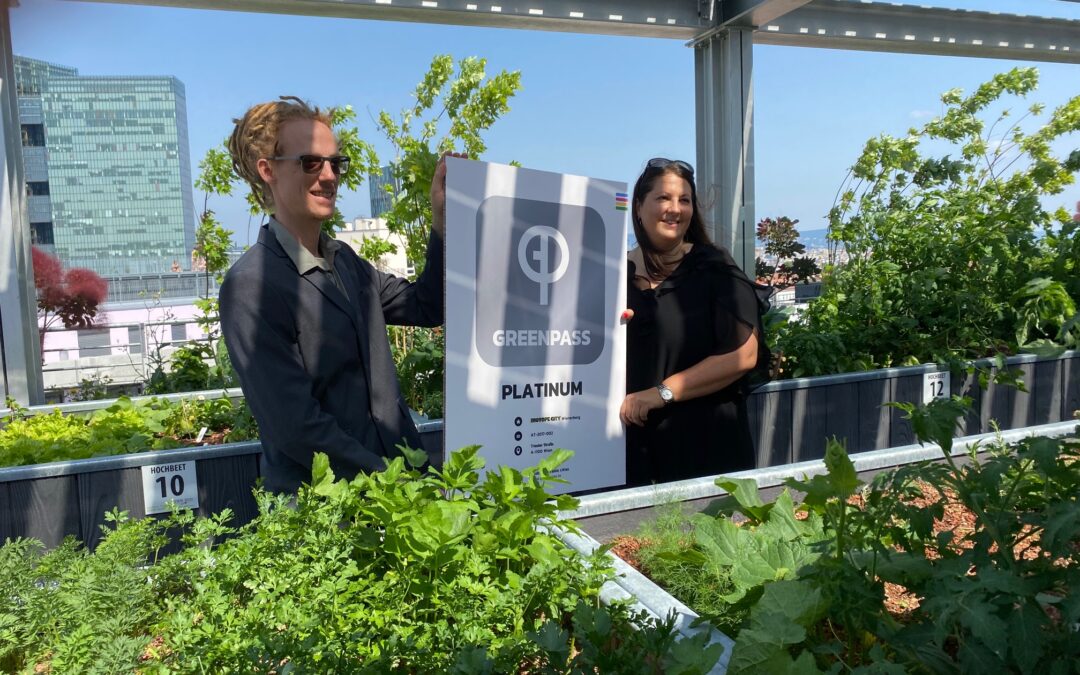 Kathrin Gaál, Deputy Mayor of the City of Vienna, and GREENPASS CEO Florian Kraus (from right to left) at the awarding of the Platinum certificate to the Biotope City Wienerberg neighbourhood on 21.6.2021

It is a special day – in two respects:
Vienna is the world’s capital of housing construction and then specifically of housing construction for the general population, social housing. In this field, Vienna is a great unrivalled role model – as a foreigner, I can say that without falling into the suspicion of local patriotism. With the Biotope City Wienerberg project, Vienna has once again added a jewel to this crown of hers:
It is a project that now anno 2021 has already realised what elsewhere is only in the first stages of planning – if at all. A project that offers an answer to the drastically changing living conditions on this planet: Climate change, species extinction, global population explosion, which is also reflected in the rapid growth of large cities in Europe and forces the most economical use of land.
With Biotope City Wienerberg, a dense urban quarter has been created that is sustainable, climate-resilient, green and nature-inclusive.
Big applause for the city, which has supported this, and for all of you here who have had the courage to reach so far into the future with your building decisions – starting with Harry Glück, who recognised the importance of the Biotope City concept more than 10 years ago and became the driving force behind its realisation.

But there is a second special feature of this project, and it has to do with the very place where we are standing here: the Wienerberger Ziegelgründe.

Today, on this very spot, there is a model quarter for good, climate-friendly, future-oriented living and housing.

For me, this has great symbolic power:
It shows that it is possible to turn around even the most terrible circumstances if you know in which direction you have to go and have the courage to take these steps with all your strength.
You have all shown this courage here, the City of Vienna with its municipal departments and you as the developer. For the project has broken new ground in many areas.
The fact that this quarter is the first in the world to be awarded the Greenpass Platinum certificate, which we are celebrating here today, also gives it the stamp of scientific proof, so to speak.
A big round of applause and thanks!