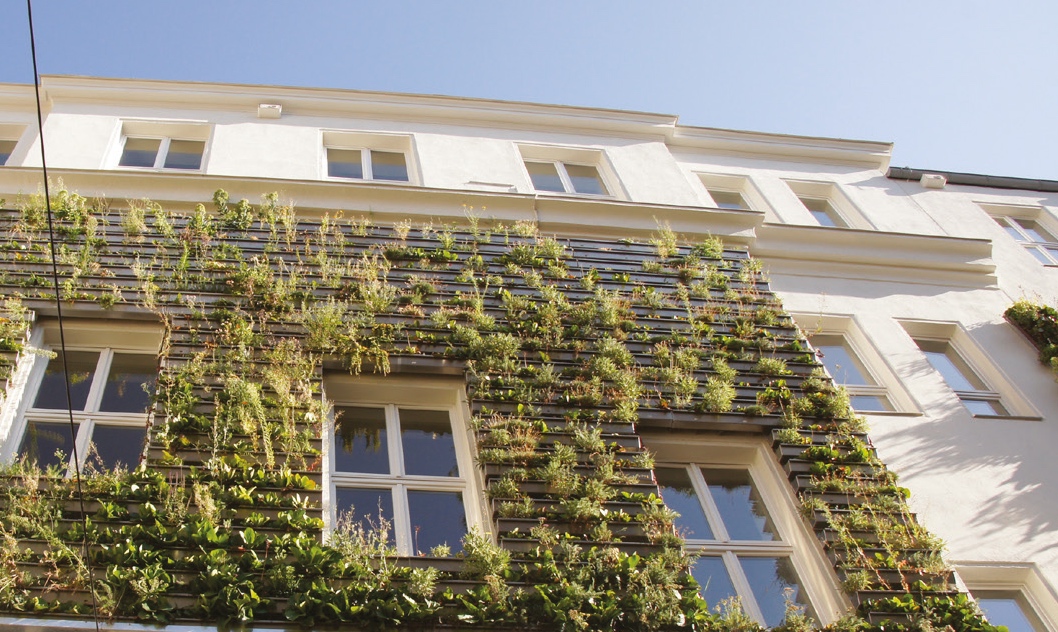 A Wall in the Change of Seasons 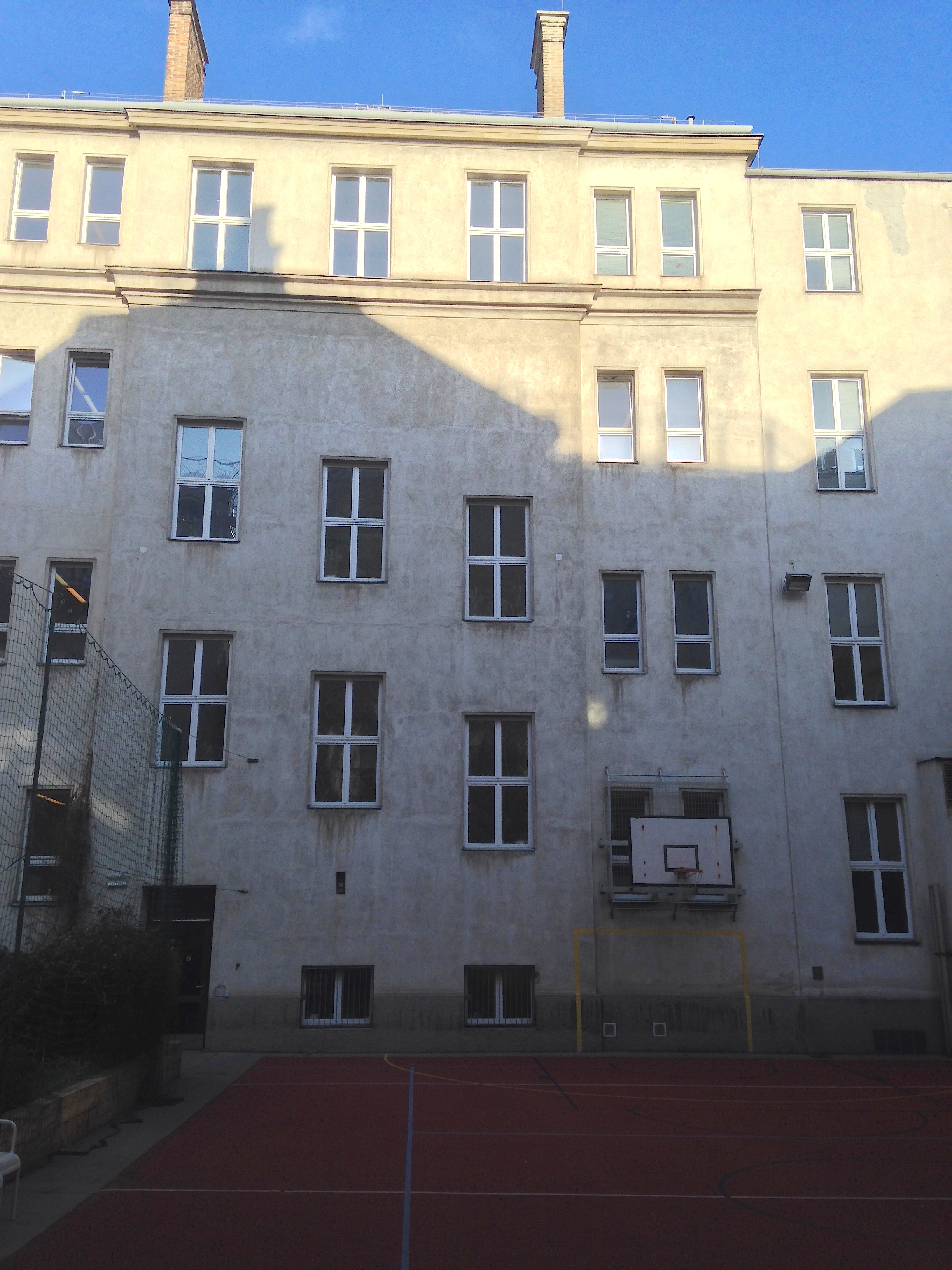 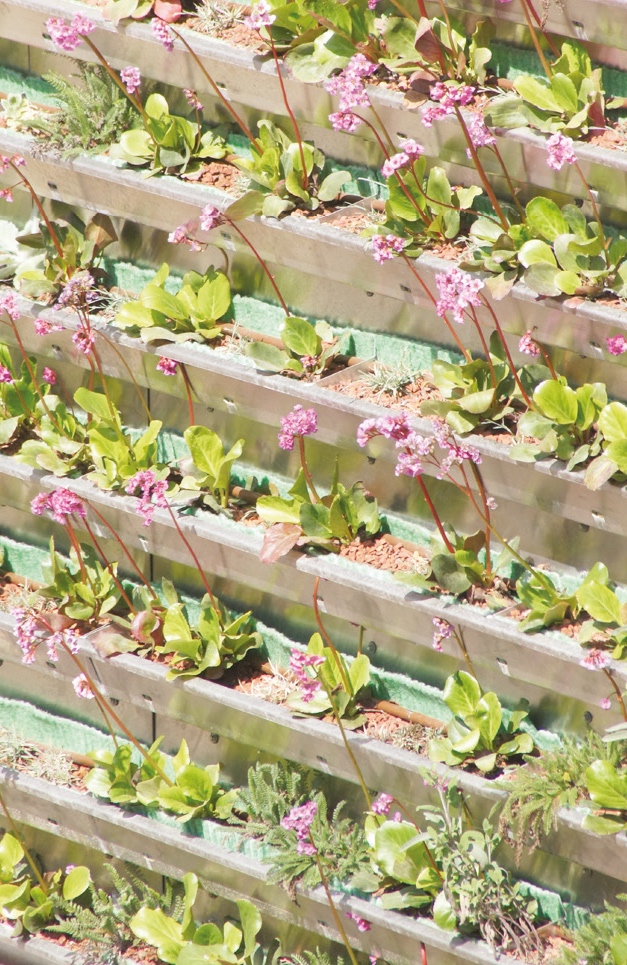 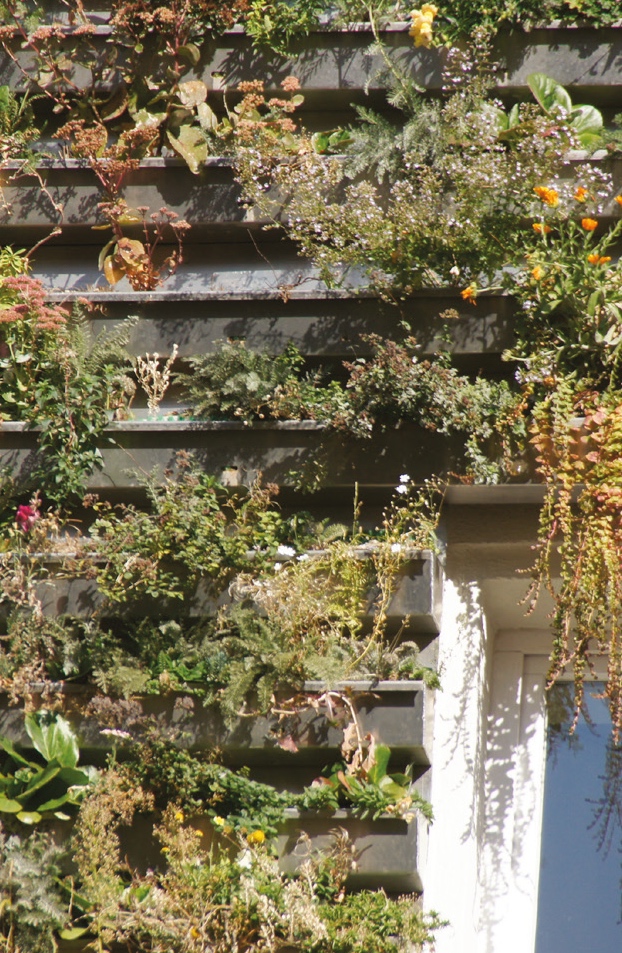 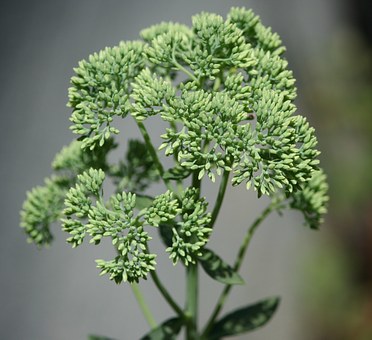 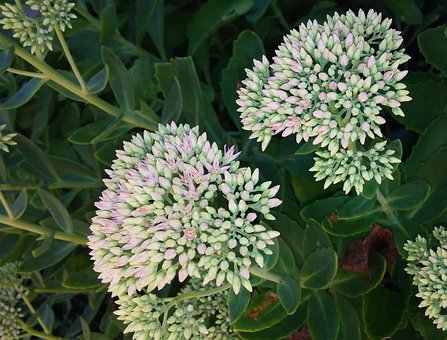 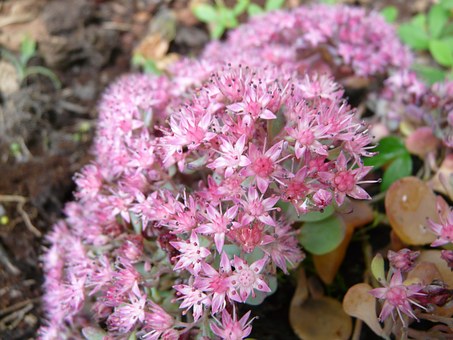 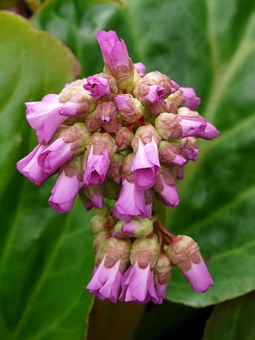 The contribution of Irene Zluwa is the result of a study of plants that have a good chance of surviving wall greening. This is certainly interesting for those who want to realize greening the grey house walls in densely populated urban areas by opulent wall greening. (ed. BCJ)

The view from the window onto a grey facade – that’s what city residents know enough about.

The boring courtyard wall in a school yard of Kandlgasse, Vienna, was transformed into a flourishing meadow during the project ‚Green+School‘ – Grün+Schule @ Agglomeration (supported by the Austrian Research Promotion Agency):

For the children and the school staff (and the neighborhood) of this school, the view from the window now offers a varied picture:

The spring comes with pink flourishing Bergenia’s – a color that makes you want more – but after the gaudy beginning, it is a little gentler with pale pink cloves and tender sage blue. Orange and yellow tones from the rock garden mix join in the summer, supported by the powerful pink of the snapdragon. In late summer, the characteristic shades of brown come that characterize the landscape in the fields, before the leaves of the Bergenia turn the facade burgundy in autumn. Just in time for the winter, the ice-blue sage leaves emerge from the brown, dead parts of the plant, making an attractive picture even in the barren season, until the wall can blossom again in the spring after pruning. 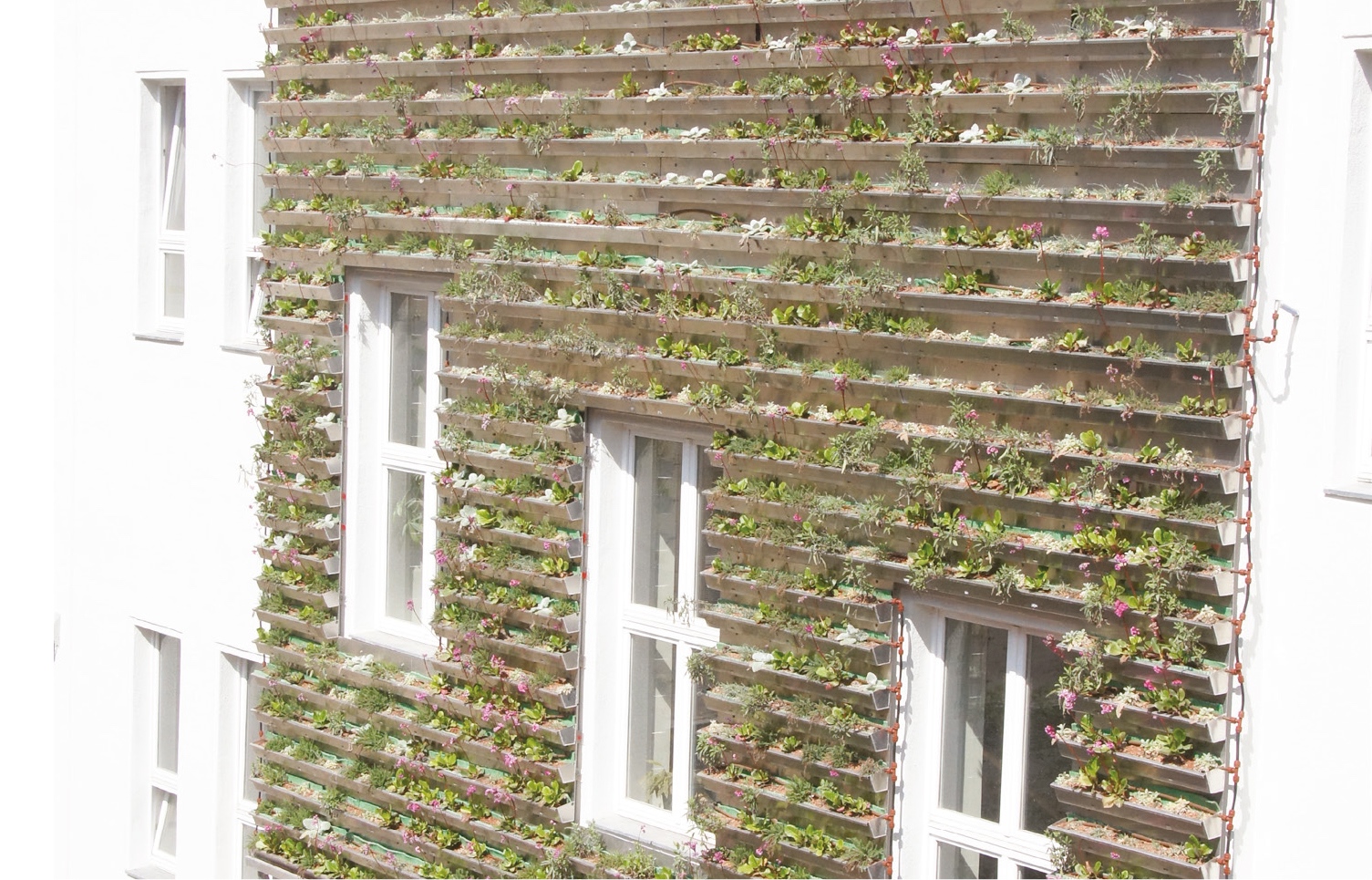 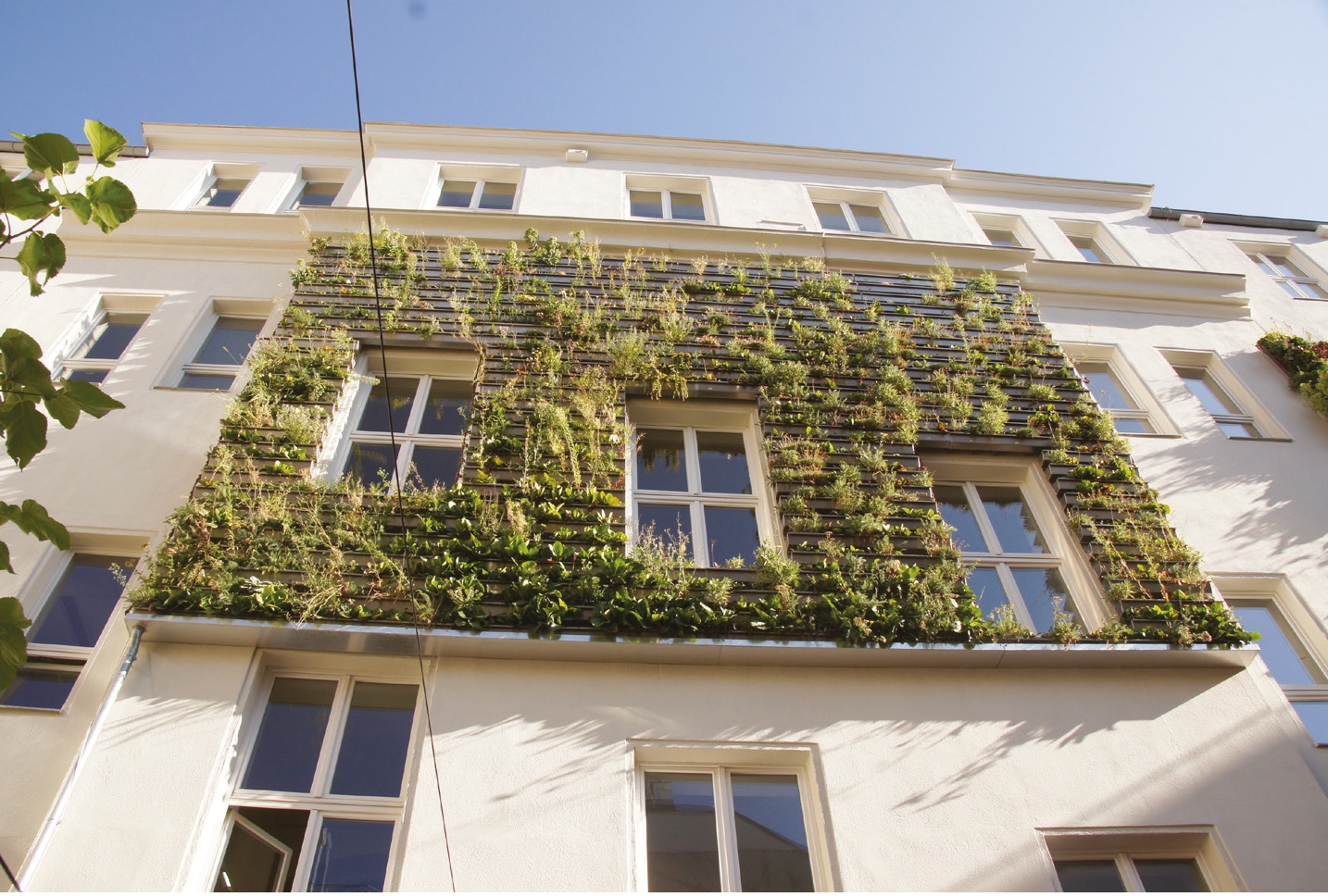 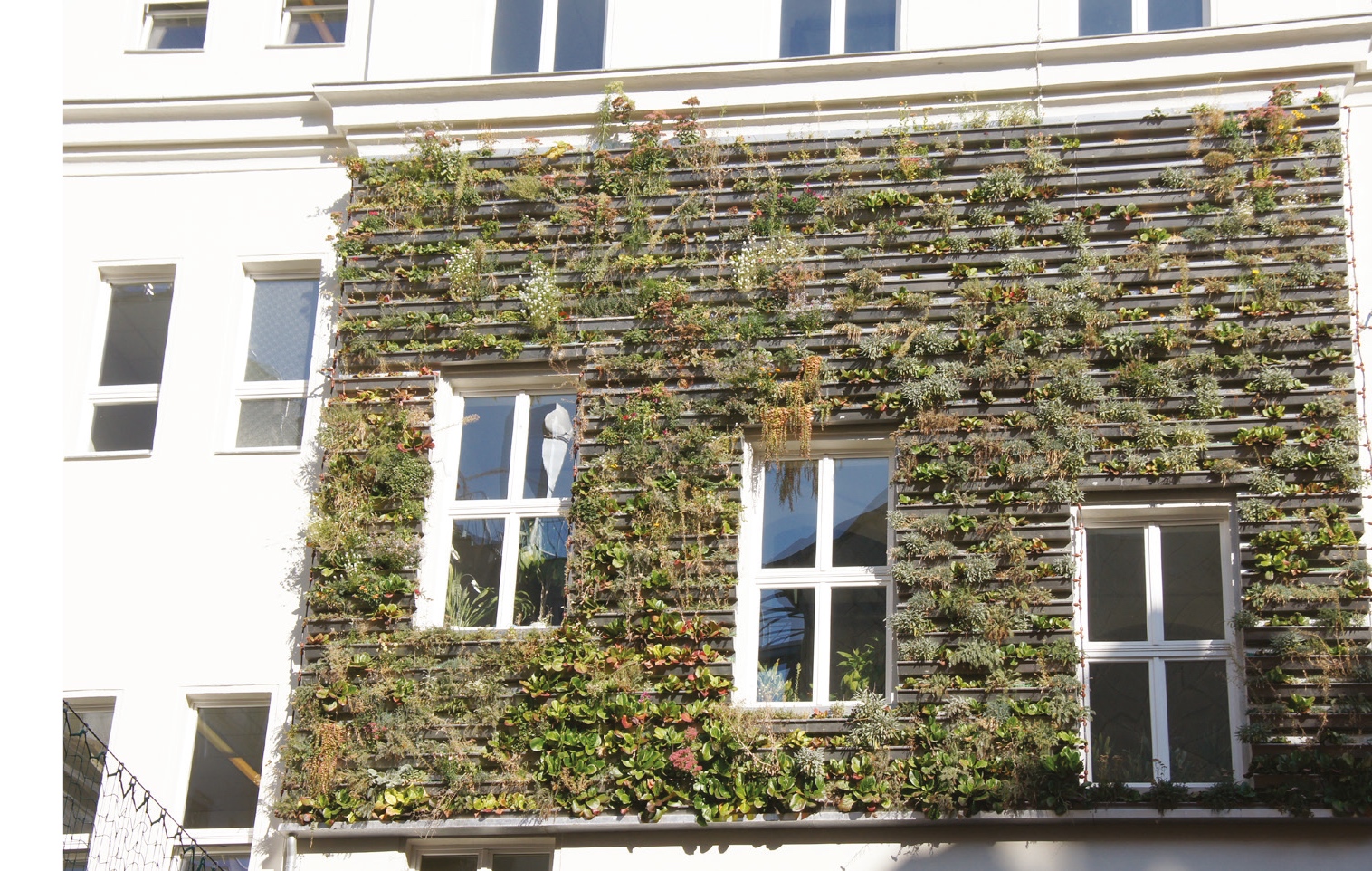 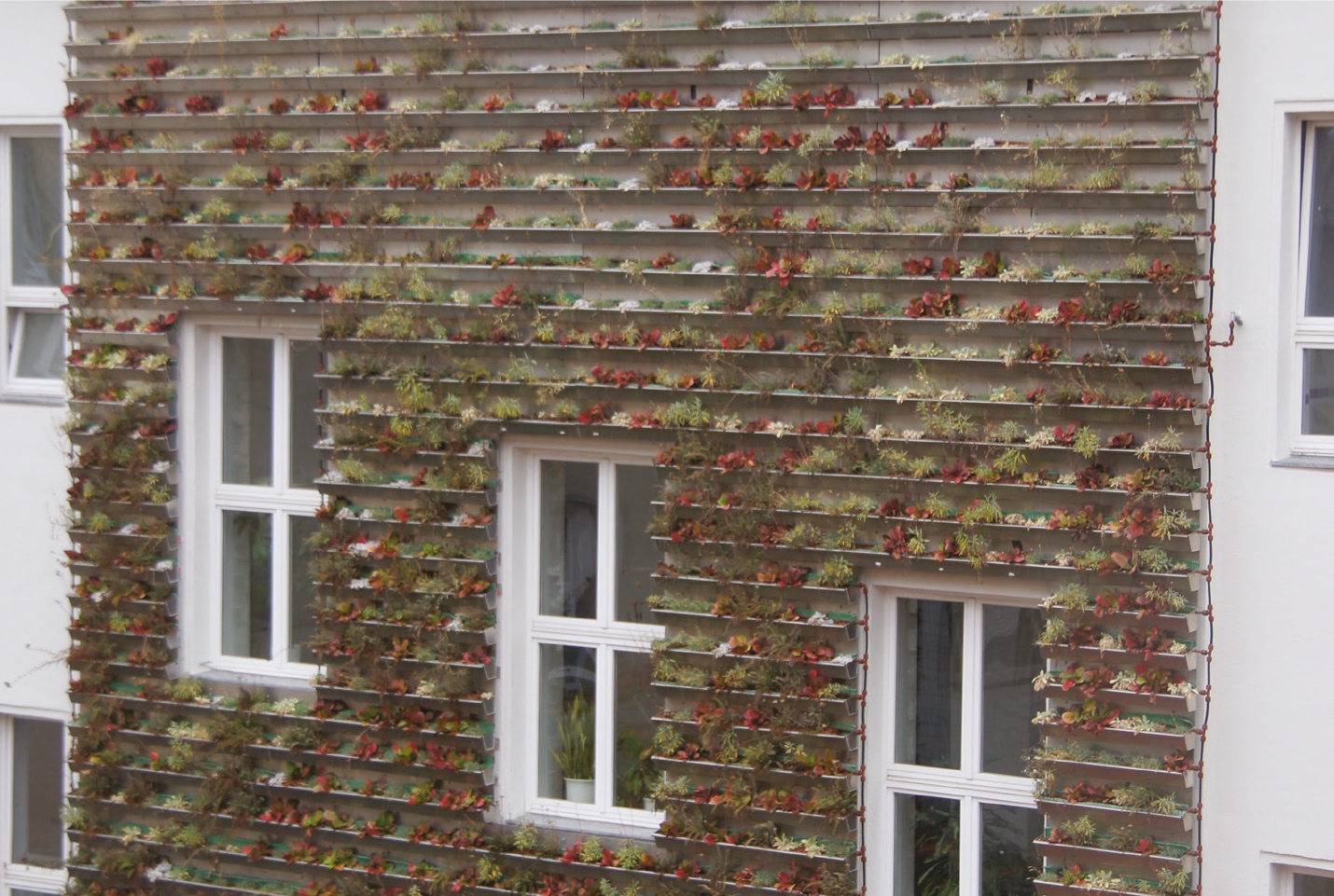 For this south-facing interior façade, a basic plant of Achillea millefolium ‚Summer Pastels‘, Bergenia cordifolia, Salvia argentea, Salvia officinalis and Stachys byzantina’Silver Carpet‘ was chosen. In two project years, the plants were observed and scored, and the current findings are as follows:

The two species with hairy fleshy leaves Salvia argentea and Stachys byzantina have  not at all proven (because of the small root space and the water reservoir), they are, except for individual specimens, completely failed. The two species were replaced by robust Sedum species (mainly Sedum telephium, which even offers a great automn aspect). Dianthus plumarius had a very poor appearance after this winter, a number of failures were recorded. Other specimens appear to be recovering, observations from the next few years will show how suitable this species is at this site. Achillea millefolium establishes itself very well in the system, and it sows itself, but the set pastel shades are barely present, the variety has changed back to its white form. Where Salvia officinalis was well rooted, its development was also very good. The strongest plant (especially in the lower rows) is Bergenia cordifolia. When pruning in the spring, a rock garden seed mixture was introduced, which developed very well in the second year and thus represents, in this system, a simple solution for a successful flowering effect in summer.

In this article, only one out of four facade greening visible in the Kandelgasse has been described. but also the gymnasium roof and some interiors of the school were landscaped. Maybe in future articles further insights can be given, or you can look at this great school on the day of the open door just yourself …

Irene Zluwa is researcher and lecturer at University of Natural Resources and Life Sciences, Vienna. Her main field is building greenery like green roofs and walls (also in combination with photovoltaic energy production). Besides of scientific work she is a student at University of Applied Arts Vienna, because sometimes it needs more than one way to bring plants to town.